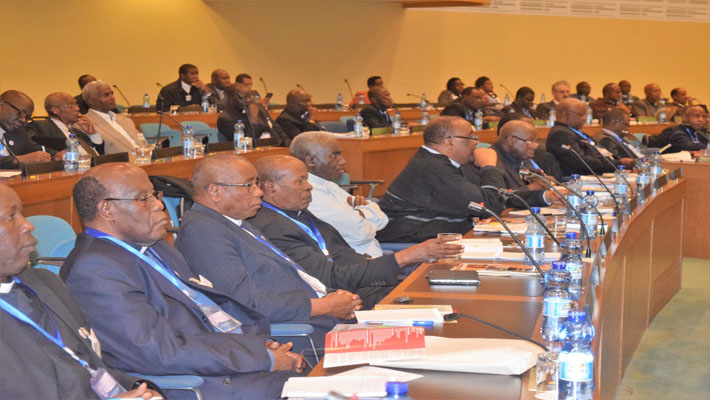 ADDIS ABABA, JULY 24, 2018 (CISA)-The Association of Member Episcopal Conferences in Eastern Africa (AMECEA) has called for introduction of a curriculum on Social Teachings of the Church in Catholic Institutions to curb rampant corruption in its member countries.

The communiqué was signed by Bishop Charles Kasonde the new chairman of AMECEA who takes over from Berhaneyesus Cardinal Souraphiel the Archbishop of Addis Ababa, who served as Chairman for the past four years.

Other office bearers elected during the plenary were Fr Anthony Makunde of Mbeya Diocese, Tanzania who succeeds Fr Ferdinand Lugonzo of Kakamega, Kenya as the new Secretary General of the Association.

Fr Stephen Mbugua, from Nakuru Diocese, Kenya was appointed the new Vice Chancellor of the Catholic University of Eastern Africa taking over from Justus Mbae the first lay Vice Chancellor who has been serving since May 5, 2016.

In their communiqué, they called for formation of policies which will promote proper governance of catholic sponsored institutions within the region.

“…We commit to work towards building a regional network of catholic professionals for sharing best practices in integrity, auditing, inclusion of the laity in governance and leadership of church institutions,” it reads.

The association urged Catholic universities and Theologians in the region to, “re-think about new academic areas in Theology that focus on issues of diversity, equal dignity, peaceful unity, integral human development and traditional African cultures that promote cohesion among the people in AMECEA region.”

On the ongoing peace initiative in South Sudan, they expressed their satisfaction in the progress of peace talks in the country whose achievement would end the suffering of the people in the region.

“As Catholic Bishops in AMECEA region we are willing to offer any necessary help within our ability that will contribute to lasting peace in South Sudan,” the communiqué reads.

The 19th AMECEA plenary Assembly took place from July 13 to 23 comprising of the Episcopal Conferences of Eritrea, Ethiopia, Malawi, Kenya, Tanzania, Sudan and South Sudan, Uganda, Zambia and the affiliate members of Djibouti and Somalia.