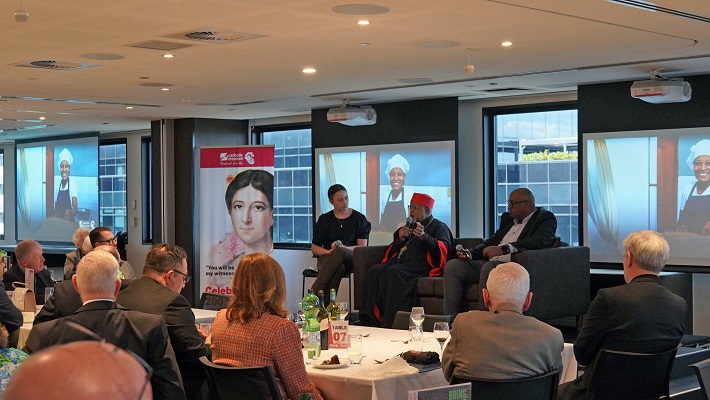 SYDNEY, MAY 27, 2022 (CISA) – At a lunch hosted at the Australian Catholic University, North Sydney campus on May 24, for gathering friends and supporters of the Catholic Mission to share the life-giving work of missionaries in Ethiopia. Cardinal Berhaneyesus Demerew Souraphiel, shared the real impact these projects have in Ethiopia.

“This is a gift we can give to society… our Catholic schools are open to all, and they concentrate on not only passing information and intellectual abilities but peaceful living and respectful relationship,” said Cardinal Souriaphiel.

In light of recent developments in which the Ethiopian government has solicited the Catholic Church in Ethiopia to build more Catholic schools across the country, educational projects formed the core of the lunchtime discussion.

Catholic Mission in partnership with local communities and the Church in Ethiopia, is currently engaged in four significant projects, including three projects directly linked to education.

In the city of Meki, a vocational centre has been developed to empower and teach women skills to foster independence in a country where 83% of women are illiterate. Since beginning the project, the Kidist Mariam Pastoral Center has supported over 8,000 women, teaching them practical skills to earn an income. This project is particularly important within the socio-economical context, where young women often feel compelled to seek work overseas, and often face exploitation.

“We believe, as the Catholic Church, that to transform society, education is the key. Educate people to give them the chance to go to school, rich and poor and middle class together so that they teach each other,” said Cardinal Souraphiel.

The Catholic Mission is also partnering with Lideta Catholic Cathedral School to provide opportunities to children of families who cannot afford school fees by offering scholarships. Through the generosity of our supporters, 67 children have currently received scholarships.

“The school offers many benefits for students both in the educational growth and in spiritual development – because of that, students from the Lideta Catholic Cathedral School consistently outperform and achieve 100% pass rates to universities. Most of our former students are now serving their country in various professional positions,” the cardinal said.

Through these mission development projects; Catholic Mission aims to empower the future generation by giving them the keys to take control over their future.