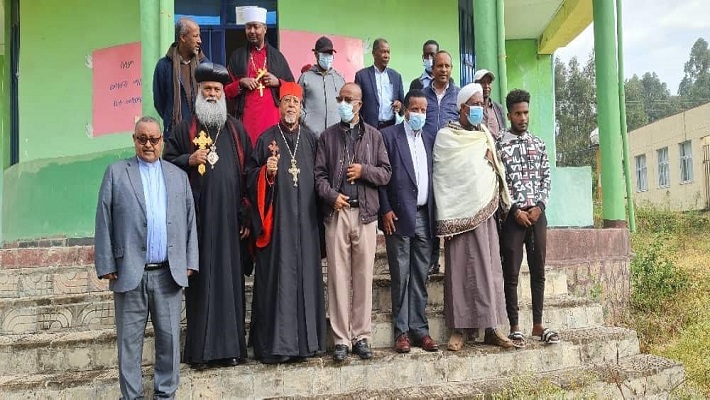 ADDIS ABABA, JANUARY 18, 2021 (CISA) – The Inter-Religious Conference of Ethiopia (IRCE) in solidarity with the people affected by war, organized a visit by religious leaders to reach out to people in Amhara and Afar regions from December 30, 2021, to January 1, 2022.

In a report published by the Ethiopian Catholic Secretariat on January 13, Souraphiel Cardinal Berhaneyesus, the Metropolitan Archbishop of Addis Ababa and President of the Catholic Ethiopian  Bishops’ Conference (CBEC) and “Rev Abba Daniel Hasso participated in this solidarity trip on behalf of the Catholic Church in Ethiopia.”

“In their three days trip, the religious leaders were able to reach Kombolcha, Dessie and Woldiya. In addition to visiting around the war-affected areas and provision of the food items, the leaders also held meetings with local church ordinaries and heads of zonal Emergency and Disaster Prevention offices,” the report read.

The religious leaders visited hospitals, universities and religious institutes in the affected areas that were reportedly “looted and totally ruined.” Also, in Woldiya, the Church leaders visited two Orthodox bishops who expressed the grave challenges the communities endured during the conflict.

“In the midst of the war, destructions and looting, it was astonishing to witness how different religious leaders in Woldiya worked hand in hand and served the people regardless of any discrimination. For this, H. E. Bishop Ermias, the Bishop of North Wollo, played a great role. Different Muslims and the residents of Woldiya also witnessed the kindness, determination and act of Bishop Ermias,” the report said.

Since November 2020, fighting has been ongoing in Ethiopia’s northern Tigray region between the federal forces of Ethiopia and regional forces of the Tigray People’s Liberation Front (TPLF).

The United Nations (UN) Under-Secretary-General Rosemary Dicarlo while briefing the Security Council on November 8, 2021, reported that, “The year-long conflict in the Tigray region of Ethiopia has reached disastrous proportions,” and that , “The fighting places the future of the country and its people, as well as the stability of the wider Horn of Africa region, in grave uncertainty.”

The UN estimates that more than 7 million people need humanitarian assistance, more than 5 million people need food, and an estimated 400,000 people are living in famine-like conditions due to an inability to move cash, fuel and supplies into the region as a result of a blockade by the federal government.