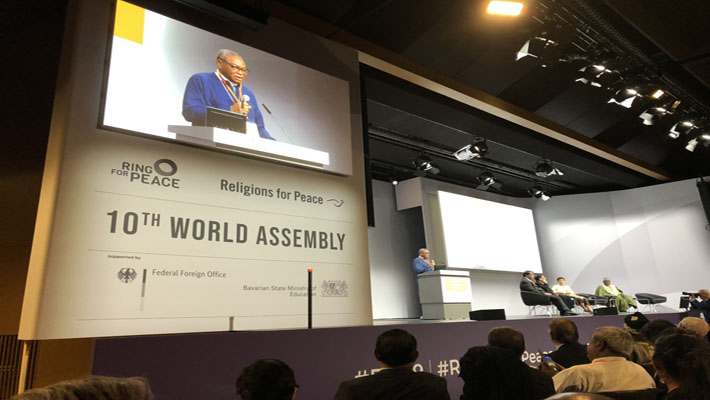 “The future depends entirely on how we address our shared welfare,” Cardinal Onaiyekan echoed sentiments by religious leaders during the launch of the meeting on August 20 in Lindau, Germany. The clerics called on communities of faith to look beyond their own local or church related issues.

“Nothing can be accomplished if we work separately,” said Ecumenical Patriarch Bartholomew I of Constantinople.

Kosho Niwano, president-designate of the Japanese Buddhist movement Rissho Kosei-kai, praised interfaith cooperation of the past and said it should continue in the future.

“We have seen half a century of progress so far and for that to continue the only way is for us to work together,” he said.

Cardinal Onaiyekan and the President of Christian Association of Nigeria (CAN) were on Thursday August 22 elected honorary presidents of the Council of World Assembly of Religions for Peace.

An estimated 900 participants from 125 countries have attending the assembly which is expected to end on Friday, August 23. Over 150 delegates from Africa are in attendance.

The delegation and conference is sponsored by the Federal Government of Germany towards promoting tolerance and understanding among religions.

The assembly is one of the major United Nation’s recognized partner organizations for the promotion of world peace.