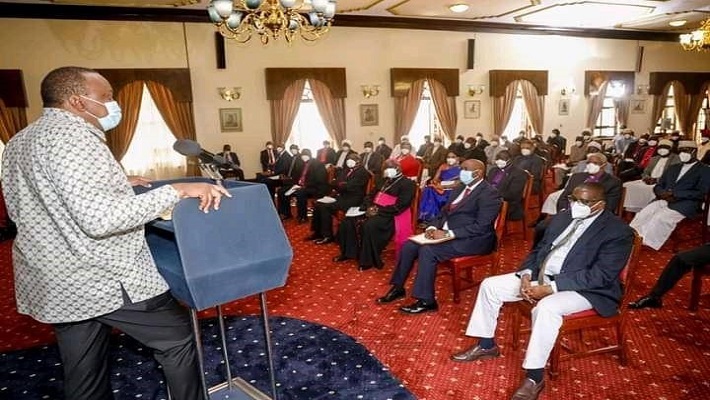 NAIROBI, SEPTEMBER 29, 2020 (CISA)-Religious leaders have asked President Uhuru Kenyatta to lead the country in addressing the growing sense of tension and uncertainty in the country resulting from real or perceived disagreements within the various arms of government and institutions, political leaders and communities.

“Despite these differences we note that in order to nurture national accord and peace, spaces for dialogue and consultation among conflicting groups ought to be created and nurtured. This was the spirit we had at the beginning of the Building Bridges Initiative (BBI),” reads a memorandum presented during an audience with the president on September 25.

The clerics condemned the ongoing, “bickering and hurling of unsavory exchanges among leaders” saying it is causing anxiety among Kenyans and risking his “legacy of a united and harmonious Kenya”.

“It is a sign of the growing intolerance in our society that is fueled by the evil seed of hatred and pride, and a misconception of leaders that they own the citizens,” they said, expressing their need “to come in to summon and call out irresponsible and disrespectful leaders.”

Just as religious leaders were involved in all stages in pursuit for multi-party democracy, Bomas search for new constitution, creation of trustworthy IEBC and civic education for good leadership, they have called for their involvement in the ongoing BBI debate.

“The process of National discussion on all the delicate issues of BBI and possible Referendum ought to be fully consultative, where a true inclusive dialogue takes place. These discussions and dialogue must lead to unity and not division,” they said, also proposing discussions on re-building of IEBC and rebuilding of confidence in the parliament and judiciary.

“We sincerely plead with your Excellency to challenge the Nation and especially our elected leaders to live up to the expectations of now desperate Kenyans. Hatred, intolerance, selfishness, greed cannot build any worthy society and cannot be the basis to project the future of a Nation,” denouncing how political class has hijacked their pursuit to address historic injustices, inequality of regions, marginalized sectors of society, cohesion and National Unity.

They asked the president to support and create an enabling environment for all constitutional public institutions for them to deliver their mandate to Kenyans.

Other issues raised in the memorandum calls to repair the moral and social fabric of the nation, growing concern of National debt and economy, levels of corruption and accountability and calls to restore dignity to the institutions of  governance.