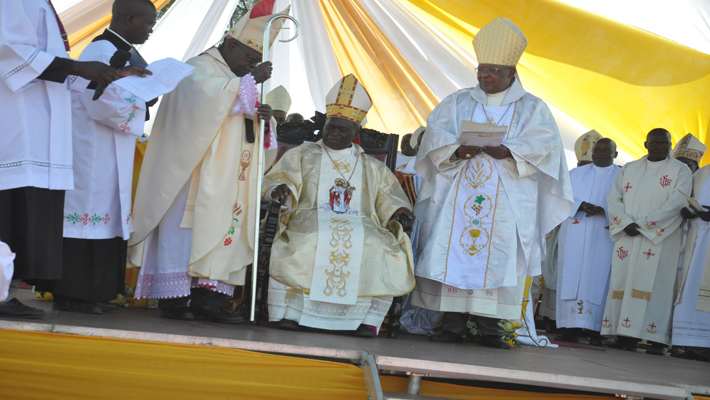 KISUMU, JANUARY 12, 2019 (CISA) – Archbishop Phillip Arnold Subira Anyolo, was on January 12 2019, installed as the new Archbishop of the Catholic Archdiocese of Kisumu in an event that was held at Uzima  University College in Kisumu.

He becomes the second Archbishop of Kisumu, taking over from Archbishop Emeritus Zacchaeus Okoth, who retired in 2018 after attaining the age of 75.

Archbishop Anyolo in his keynote speech thanked his predecessor for the smooth and mutual transition and for laying a strong foundation of faith in Kisumu.

“We promise to continue sustaining and maintaining the legacy you started,” Archbishop Anyolo promised his predecessor.

Speaking to the laity and clergy of Kisumu, he promised to work with them, being guided by the call of St.Paul in Colossians 2:7, to be rooted in Christ. Which he said is at the core of the priestly and baptismal vocation.

“I come here as a humble servant of God, a child of the universe and the son of our beloved Church, that calls us to be rooted in Christ. With our mother Church I want to echo the words of St. Paul, who invites us, to, “be rooted in Christ and build upon him, and establish ourselves in faith,”

“This will be the mission of my Episcopal service among you the people of God in Kisumu, that we may form a family of faith rooted in Christ,” he added.

Archbishop Okoth, wished his successor well and promised to be available and to work with him.

“As I leave the stage…I wish him well and I promise to be available for consultation and co-operation,” he said.

The installation rite was led by outgoing archbishop Okoth, and was graced by all the sitting bishops, four retired bishops, Monsignor Marco Ganci, in-charge of Nunciature affairs in Kenya, hundreds of men and women religious, Deputy president William Ruto, Opposition leader Raila Odinga, a score of political leaders and thousands of faithful.

Speaker after speaker, congratulated Archbishop Anyolo and pledged their support in his new assignment.

Archbishop Anyolo still remains the Apostolic Administrator of the Diocese of Homabay, from which he was transferred to Kisumu.

The political leaders, called on the Church to continue playing the unifying role in the country, and to be a voice of reason whenever there is conflict in the country.