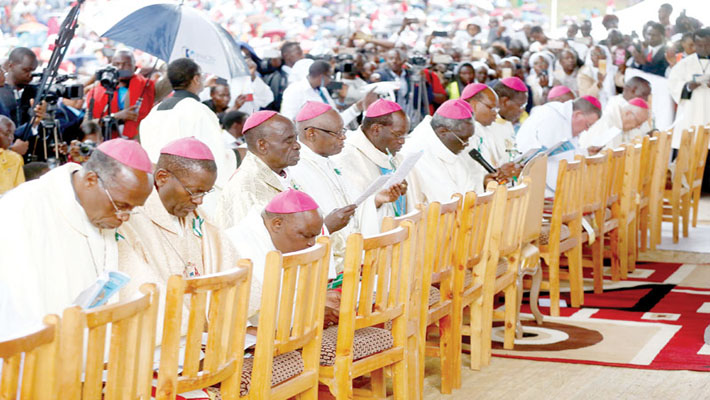 NAKURU, OCTOBER 11, 2019 (CISA)-The Kenya Conference of Catholic Bishops (KCCB) has come out to strongly condemn corruption, and called on all Kenyans to, “change our wayward ways and decide to personally reject any act or form of corruption.

“We wish to lead the county and every person of good will to commit himself or herself before God, to fight corruption from the grassroots up to the highest offices,” the bishops said in a statement read out October 5, at the Village of Mary National Shrine, Subukia during the 2019 annual national pilgrimage and prayer day.

The event saw the launching of a six-month nationwide anti-corruption campaign that will be marked by renewal of Baptismal promises in all catholic Churches on Sundays.

As a gesture of keeping proceeds of corruption away from the Church, the bishops directed that all contributions to the Church be done by either mobile money transfers, or by cheques in order to keep track of the donors.

Among the directives was that that priests keep records of any gifts in excess of KSh 50, 000. They further outlawed political speeches within the liturgical celebrations and restoration of true nature of funeral saying anything political or developmental “should be specifically excluded for honour of God and respect of the dead.”

“We make this public commitment, personally and as shepherds of the catholic church with all its members, and call on each and every one who believes in God to take this deep and desired decision for the sake of our society and our children,” said the bishops.

In a prophetic gesture of mourning, the bishops, bearing crosses in their hands, walked barefoot and knelt on the Holy Ground to plead for God’s mercy.

The bishops expressed their hope that many other Kenyans will join the anticorruption campaign and, “…rid our country once and for all of this great sickness and evil of corruption,” calling on Kenyans to wear white s with green edges in solidarity with the campaign.

“We commit to the fight against corruption and may God give us courage to overcome the challenge one and all.  With God we can overcome this monster and giant as David did,” they concluded.

This year’s national prayer day was animated by the Archdiocese of Mombasa.