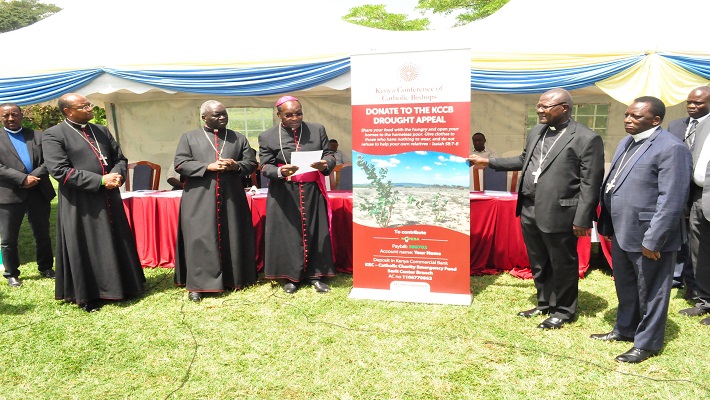 NAIROBI, MAY 27, 2022 (CISA)-3.5 million Kenyans are food insecure and in need of humanitarian assistance, the Kenya Conference of Catholic Bishops (KCCB) has warned.

The Catholic bishops in a statement read by Archbishop Martin Kivuva of Mombasa and Chairman of KCCB on March 27, said the drought situation in the country is the worst drought ever in 40 years and has pushed many families on the brink of hunger.

“This has been caused by three years of below-average rainfall and the situation continues to deteriorate leading to food and water shortage, the death of livestock and the loss of livelihoods for the affected communities. The situation was compounded by the desert locust invasion at the beginning of last year and the covid-19 pandemic,” the bishops said.

According to the bishops, the million-plus figure displays a huge increase since August 2021 with 1.5 million livestock reported dead due to lack of water and forced migration.

“There have been poor harvests and reduced livestock production resulting in households facing food insecurity at a crisis level. The situation has been worsened by an increase in the prices of specific stable foods,” reads the statement jointly signed by bishops of KCCB and co-read by Archbishops Philip Anyolo of Nairobi and Anthony Muheria of Nyeri in presence of Bishops Paul Kariuki of Embu and John Oballa of Ngong’.

In mitigation, affected families will receive cash transfers, water and sanitation, agricultural inputs and fodder and veterinary for livestock for the next six months.

“We are calling on Kenyans and all people of goodwill to contribute cash and give in-kind donations to enable us to salvage the desperate situation for many families affected by drought in the above-listed areas,” the bishops appealed inviting partners to join the campaign by donating through MPESA paybill 560702 with your name as account number or to the KEC-Catholic Charity Emergency Fund through Kenya Commercial Bank (KCB).