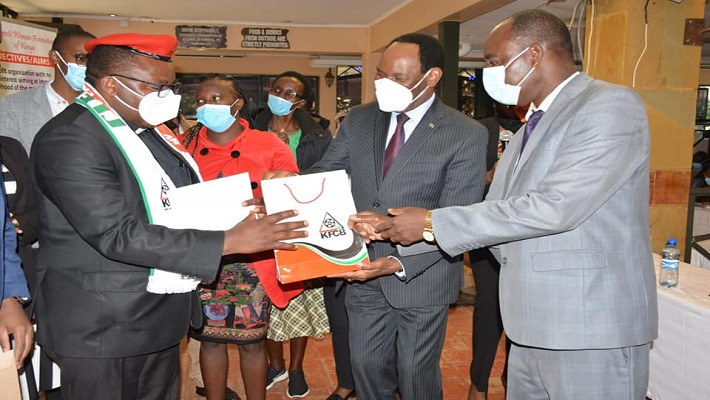 NAIROBI, JUNE 29, 2021(CISA)– Fr Peterson Ndegwa of the Catholic archdiocese of Nyeri has been appointed as an Ambassador of Clean Content by the Kenya Film and Clarification Board (KFCB).

“KFCB shall continue to partner with like-minded public and private sector organizations to champion moral values and protect children from exposure to harmful content. We are not against artistes. What we are asking them is to produce content that promotes positive social values,” Dr. Ezekiel Mutua, the Chief Executive Officer of KFCB said on June 24 during KFCB Ambassadors Coronation ceremony.

Fr Ndegwa will be among the people the board will use to effectively communicate KFCB’s regulatory mandate, programs and campaigns, with the aim of protecting children from exposure to harmful content.

“Research has shown that film and media content influence behavior and the thinking of consumers, especially children who are most impressionable. The media should play its role as the watchdog of society and safeguard Kenya’s moral values,” he said.

According to Dr Mutua, KFCB’s partnership with Nyeri County leaders started a long time ago and that the partnership will go on to champion clean content.

“We need to speak against dirty content in one voice. We have a collective responsibility to protect children from exposure to harmful content,” he said.

Fr Ndegwa doubles as the Catholic Justice and Peace Coordinator and Caritas Director for the Catholic archdiocese of Nyeri.