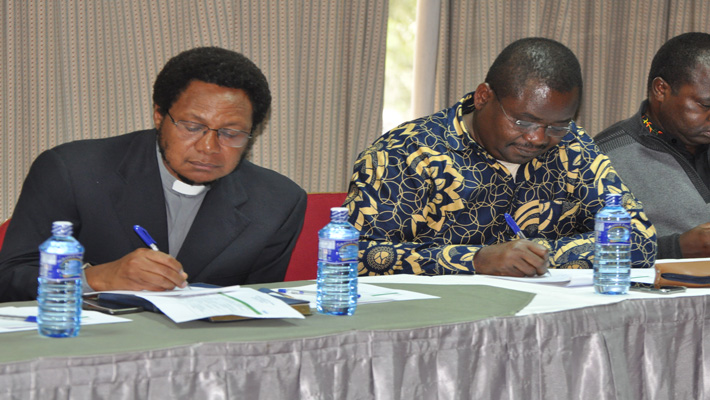 NAIROBI, NOVEMBER 8, 2019 (CISA)-The Catholic Justice and Peace Commission of the Kenya Conference of Catholic Bishops has today, November 8, convened a National Dialogue on Coal Mining in the country.

The meeting held in Nairobi brought together representatives from the Ministry of Mining and Members of the National Assembly from constituencies where coal mining is ongoing to address concerns that comes with the extraction.

Bishop John Oballa Owaa, the Chairman of the CJPC in a statement said the Catholic Church is keen in ensuring resources benefit the poor and serves towards the realization of integral human development.

“In order to cut through the ‘tough conversation’ about environmental protection in extractive Industry, I believe that a new kind of collaboration will be necessary to re-engage the disengaged and re-inspire the engaged but reluctant and increasingly disheartened,” reads a statement delivered on his behalf by Fr Nicholas Makau, the Chairman CJPC at the Religious Superiors Conference of Kenya (RSCK).

The bishop highlighted environmental degradation, pollution and climate change as the main challenges associated with coal mining noting that as the world population continues to grow “protecting our environment and our natural resources is not a luxury, but a crucial investment in our sustainable economic future.”

With reference to climate change, Bishop Oballa warned that it has the ability to change the face of the planet and cause economic damage and human suffering.

“We have to act. A considerable part of the scientific community tells us that we have to keep global warming to no more than 2°C above the pre-industrial level. Higher than that, we risk irreversible and possibly catastrophic global changes.”

“As we meditate on the presentations and reflect on the common good for our people, let us also think of future generations as we make various policy recommendations,” he added.

While accepting the cautions raised in the statement by Bishop Oballa, the Principal Secretary for the State Department for Mining in the Ministry of Petroleum and Mining, John Omenge stressed on the need to conserve the environment not only in coal mining industry but also in any other resources.

He highlighted ownership of the resources, environmental concerns, public participation and equitable share of resources as pillars in the mining sector captured in the constitution of Kenya that should guide the extraction of natural resources in the country.

A keynote address delivered by Benson Makali Muli the Member of Parliament for Kitui Central on behalf of Stephen Kalonzo Musyoka, Wiper party leader proposed the use of modern technology in the extraction of coal to mitigate environmental issues that come with coal mining.

“He gave an assurance that him being the party leader of wiper party the main political party in the region with the most elected leaders in that region he gives his full support to this initiative,” he said.

The meeting aimed at giving the members of Parliament a chance to contribute to the ongoing debate on coal extraction that is either ongoing or yet to begin in the constituencies they represent.