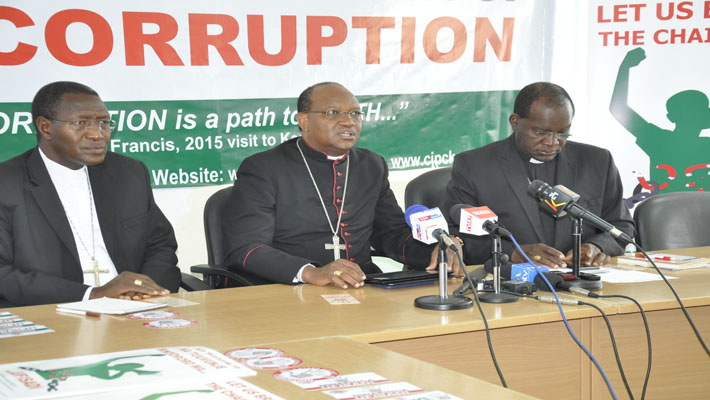 NAIROBI, OCTOBER 4, 2019 (CISA)-“We know this is a social evil that is breeding desperation, crime, unhealthy leadership and a false sense of self-worth for those deeply involved in this corrupt practices and even building more cultural division amongst the Kenyan people and beyond,” the Kenya Conference of Catholic Bishops’ has said.

“…we are entangled in this web that is slowly sinking our country and our heritage and somehow the sin is getting entrenched into our common life as just an ordinary thing,” Archbishop Anthony Muheria said at a press conference of October 4 in Nairobi.

The archbishop was addressing the media alongside Archbishop Martin Kivuva of Mombasa, and Bishop Alfred Rotich emeritus of the Military Ordinariate ahead of tomorrow’s launch of an anti-corruption campaign dubbed, “Breaking the chains of corruption,” by the Kenya Conference of Catholic Bishops.

The six month campaign will  be launched tomorrow, October 5, during the Annual National Prayer Day in Nakuru.

The campaign is in response to an invitation by Pope Francis during his visit to Kenya in 2015 where he condemned corruption and appealed to the young people to, “overcome and not to be swallowed by this evil.”

“…this is what we are set to emphasize because corruption is a sign of a rotten heart that rots all the human relations. It is a rejection of truths honesty and a rejection of Gods’ laws. That is why we are seeking an inward conversion,” Archbishop Muheria stressed.

Through the campaign, the bishops hope to restore uprightness and commit the public towards “walking on honest paths.”

“We hope that we drive this change from the sense of helplessness that we feel in our nations and many people including Christians to a state of taking charge of the route we must take as humans as society as a nation,” he added.

The bishops invited Christians and Kenyans of good will to join them during the launch of the campaign and to further commit towards the restoration of human dignity.