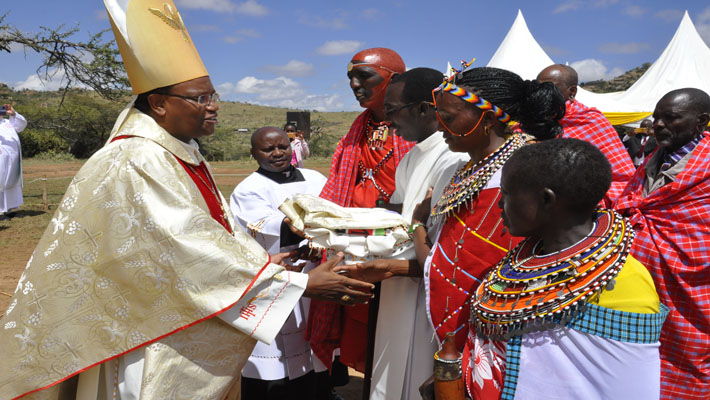 Archbishop Anthony Muheria ordained Fr Musungui on August 3 at his home parish in an event that was attended by hundreds of Christians from all over the Catholic Diocese of Nyeri.

According to Archbishop Muheria, the Fr Musungui’s ordination was of great significance in a region that has had 40 years of evangelization without producing any indigenous vocations.

“He wants to uplift you by first uplifting one of your own to be associated fully with God’s works and Christ. God has chosen your own, Francis Musungui Ole Ntosho,” the Archbishop said in his homily.

“Francis you have studied, passed and your community has presented you because you are capable …it is now upon you to dedicate yourself to be used as a stick and spear in taking care of God’s sheep,” archbishop Muheria stressed.

“People can see, people can experience the joy, people can actually feel the generosity of this people, the Maasai of Dol Dol, of those families, we can celebrate it and they can feel it from close-by rather than celebrating where perhaps they would not be able to see it,” the archbishop told CISA.

Fr Francis was to be ordained on June 22 in Nyeri alongside five others, but his ordination was separated and the venue changed to Dol Dol, to give a stronger witness to the community alongside evangelizing the region.

“Francis had to be taken through a series of events as per their culture before he was handed over to the Church for the ordination,” said Fr Paul Mwangi, the Vocational Director in the Catholic Archdiocese of Nyeri.

Francis was installed a Maasai elder to make his acceptable in the community. Present at the ordination were political leaders from the region including Laikipia County Deputy Governor, John Mwaniki, Laikipia North Member of Parliament, Sara Korere, and Members of Laikipia County Assembly.