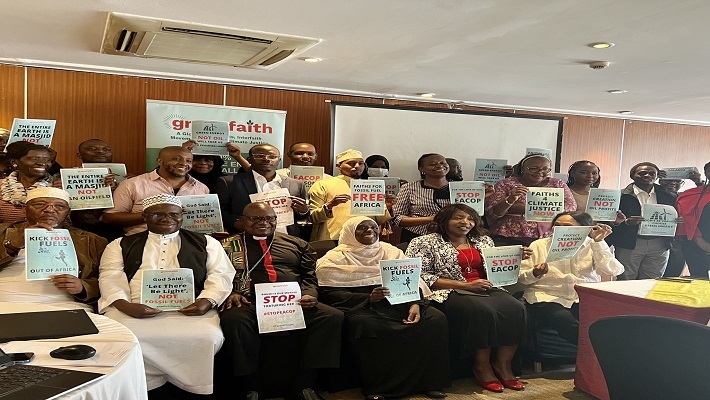 NAIROBI, OCTOBER 28, 2022 (CISA) – Religious leaders drawn from different faith groups in Kenya, in solidarity with their counterparts in Uganda, have condemned the actions and progress of the East African Crude Oil Pipeline (EACOP) and called on governments to reject any efforts from international investors to introduce new fossil fuel projects in Africa.

The faith leaders who were speaking at a religious leader’s roundtable meeting on EACOP organized by GreenFaith Organization at Sarova Panafric Hotel on October 27, demanded faster universal access to clean energy, “one that does not lead to the destruction of the environment or cause harm to the people who occupy it.”

“There is no justification for allowing new fossil fuel projects in Africa, or East Africa for that matter when the alternative more renewable energy sources have not been exploited. We must instil proper and sustainable use of Earth’s resources without hurting its occupants. This way we will be fulfilling the Earth’s stewardship role assigned to us by the Creator,” said Sheikh Ibrahim Lethome, religious and Legal advisor of the Supreme Council of Kenya Muslims (SUPKEM).

The religious leaders called on the government to be cautious of the interests and efforts of Global North countries and companies that want to invest in Africa’s energy sector.

“Not all that glitters is gold. We must not accept anything that will adulterate the earth in the name of helping Africa to develop,” said Pastor Sam Kaloki of the Gospel Confirmation Centre.

“It is true East Africa wants to develop. But at what cost? EACOP risks tripling East Africa’s carbon emissions and leaving the continent dirtier and poorer after the stakeholders cart away the profits. It is not for the good of Africa, it is for the greed of the elite, trying to line their pockets, at the expense of the planet and the community. If it were so, why should more than 1,000 families be displaced, and have their rich productive agricultural lands taken away,” advanced Omar Elmawi, coordinator of the #STOPEACOP campaign and Executive Director of Muslim for Human Rights.

According to the Petroleum Authority of Uganda, EACOP is a 1,443km, 24-inch diameter heated and buried crude oil pipeline that will start from Kabaale, Hoima in Uganda to Chongoleani, Tanga in Tanzania. Upon completion, the project is estimated to be the world’s longest heated pipeline.

Founded in 1992, GreenFaith is an international, interfaith environmental organization whose mission is to inspire, train, and organize people of diverse religious and spiritual backgrounds around the world for environmental action.