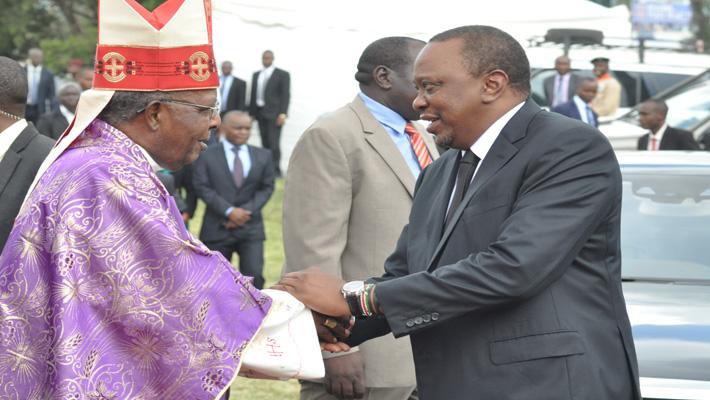 NAIROBI, NOVEMBER 14, 2018 (CISA)-President Uhuru Kenyatta has ordered the Ministry of Education to let the Church run the schools they built.

The president was speaking of November 13, at the University of Nairobi grounds during the funeral Mass of the late Archbishop John Njenga, Emeritus of the Archdiocese of Mombasa.

The president noted the recent increase in indiscipline cases in schools and alluded it to the lack of moral guidance of students by the Church, emphasizing that back in the day, when the Church had a say in schools, such indiscipline was unheard of.

“Look at what is happening in our schools, look at the level of indiscipline in our schools. Look at some of the activities where school children are burning schools, it tells you there is something missing in their lives. This is not something we heard of in those days,” he quipped.

He further emphasized that chaplaincy must be restored in schools to help mentor and spiritually guide the students from an early age, adding that there was no law prohibiting that kind of move.

“There are a lot of schools sponsored and built by the Church. The Ministry of Education, I’m saying this for the last time today ,ensure  that you restore that  sponsorship, and secondly, you have one week  to restore all Church owned land and schools back to their rightful  owners,” he said.

After independence the government of Kenya took over all the schools that were put up by the missionaries, following the enactment of the Education Act of 1968.  The churches that had put up the schools only held stake as sponsors, without much say to the running and management of the institutions.

The President noted that the restoration of the schools to the Church would be an honor to the memory of the late Archbishop Njenga, who he eulogized as one who was “Dedicated to education.”

The president added that the while the Church and State must remain separate, they must work together for the good of the nation.

The Mass was also attended by Deputy President William Ruto among other government officials.