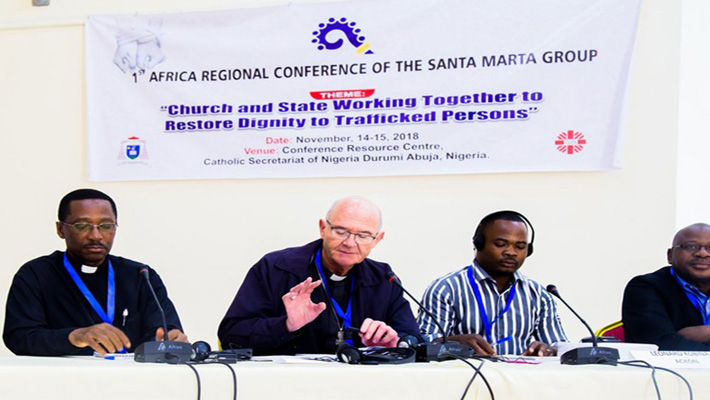 NAIROBI, SEPTEMBER 27, 2019 (CISA)-The Second African Santa Marta Group Conference will run from October 1 – 4th in Nairobi, and will bring together the Church, law enforcement agencies, regional and international actors, and organizations that work in the areas of migration and control of human movements to address human trafficking in Africa.

The KCCB Commission for Refugees Migrants and Sea Fares will host the Conference that will take place at Dimesse Spiritual Centre in Karen Nairobi.

Themed, “Sensitizing the local communities and Government on dangers of Human Trafficking,” the conference will bring together around 100 participants from all over Africa, especially from countries where human trafficking is rampant.

The Santa Marta Group (SMG) is an international alliance of leaders in law enforcement, and the Church from around the world working together with civil society to counter human trafficking.

In this unique approach, international partners are brought together to develop a common commitment and objective.  The conference is an opportunity to learn from one another, develop partnership against slavery and find practical and effective responses to the crisis in Africa.

According to Mrs Margaret Masibo, the Executive Secretary for the KCCB Commission for Refugees Migrants and Sea Fares, human trafficking is a major issue not only in Kenya, but in Africa.

“We have many cases especially of those trafficked to Arab world to work, but they end up being victims of human trafficking.  Even within the country we have many who don’t even realize they are trafficking people, for example for domestic purposes, then they are mistreated and end up in situations that are dehumanizing. That’s why it’s very important that we come together with government and law enforcement agencies to see how to curb human trafficking, which as pope Francis says is a scar in the human body. It takes away the dignity of the human person as created by God,” she told CISA.

The conference in Kenya comes a week after the first General Assembly of Talitha Kum, an international network of consecrated life fighting human trafficking took place in Rome Sept 21 – 27. While meeting the delegates of the assembly on September 26, Pope Francis called for more congregations to join in the fight against human trafficking.

“While I invite you to continue this commitment, I am also making an appeal to other religious congregations — both women’s and men’s — for them to join this missionary work, putting people and resources at its service so that it can reach everywhere,” he told the delegates.

The Catholic Church in Kenya, through various organizations, plays a role in awareness creation and in rescuing and supporting people who have been trafficked.