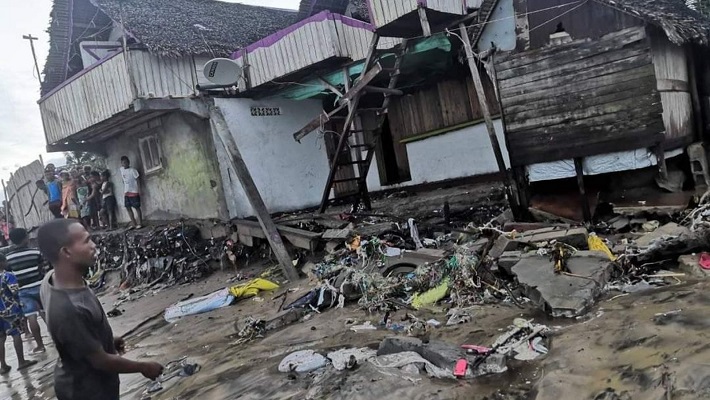 ANTANANARIVO, FEBRUARY 22, 2022 (CISA) – Pope Francis has expressed closeness with victims of Cyclone Batsirai and tropical storm Dumako in Madagascar as the country awaits another cyclone, Emnati which is expected to make landfall today.

The pope in a telegram message to President Andry Rajoelina of Madagascar sent on the pope’s behalf by Vatican Secretary of State Cardinal Pietro Parolin assured of his prayers to the victims of cyclones in Madagascar, which have displaced thousands and killed more than 100 people this month.

“Having learned with great sorrow of the wounds that have once again struck the island of Madagascar, through repeated cyclones, floods and the destruction of houses, Pope Francis expresses his prayerful communion with all those affected by these natural disasters,” the message reads.

As Madagascar prepares for another cyclone Emnati to make landfall today February 22 according to the national meteorological service, the country continues to face effects of the recent tropical storm Dumako which claimed 14 lives and displaced a 4,323 and cyclone Batsirai earlier February killing 124 people.

“Deeply saddened by these events, he expresses his profound solidarity with those affected by this tragedy and prays for the repose of the deceased, the healing of the injured and the consolation of all those who mourn the loss of their loved ones and their homes,” says Cardinal Parolin.

The Secretary of State of the Holy See also expressed the deep sadness and solidarity of Pope Francis who prays “for the rest of the deceased, the healing of the wounded and the consolation of all those who mourn the loss of their loved ones and of their homes”.

According to reliefweb, “There is a risk of a double tragedy, as some communities are expected to be hit by a second cyclone in less than a month. Tropical Cyclone Emnati is likely to have a devastating effect on communities on the eastern coastline of Madagascar that are still reeling from the impact of Cyclone Batsirai.”

Further, it warns that the arrival of Emnati, with projected windspeeds of 220 km per hour, will worsen an already dire humanitarian situation in the country.