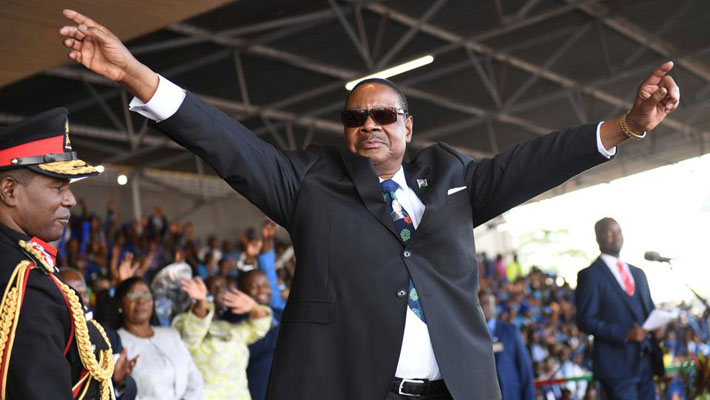 BLANTYRE, MAY 31 2019 (CISA)-President Peter Mutharika was on May 28 sworn in for a second five-year term as Malawi’s president.

At the event that took place at Kamuzu Stadium in Blantyre, Mutharika called on Malawians to unite and build the country.

78-year-old Mutharika took the oath of office a day after the Electoral Commission declared him the winner of the May 21 General Elections despite claims of irregularities by Lazarus Chakwera, leader of Malawi Congress Party (MCP), who came in second.

Chakwera polled 35.41%, falling short of president Peter Mutharika’s winning 38.57% by just 159,000 votes. Chakwera and his supporters had called for a recount arguing that there were serious irregularities during the counting of votes cast.

President Mutharika however has dismissed doubts over the outcome, saying that international observers had deemed the May 21 election, “Peaceful, free and fair.”

“It is the victory of the rule of law and the rule of democracy. Democracy has won,” he said.

Mutharika, called on his rivals to join him in rebuilding the country.

“In elections, there can only be one winner. The election is gone. Let us now move on to rebuild this nation,” he said.

Malawians went to the polls on Tuesday May 21 to elect 193 members of parliament, 462 local government councillors, and the president.

According to the Electoral Commission, Nearly 5.1 million people voted.