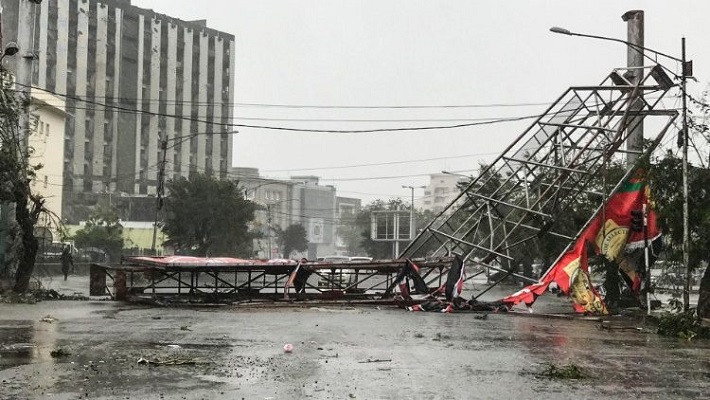 BEIRA, JANUARY 29, 2021 (CISA)-21 people have been confirmed dead and more than 270,000 displaced across Southern Africa according to preliminary information by United Nations Office for the Coordination of Humanitarian Affairs.

This is in the aftermath of Cyclone Eloise which made landfall near Beira in Sofala province, central Mozambique, around 2 AM Saturday, January 23 with high winds, heavy rains and severe flooding.

“The Eloise weather system has left at least 21 people dead -11 in Mozambique, 3 in Zimbabwe, 4 in Eswatini, 2 in South Africa and 1 in Madagascar- and affected more than 270,000 people across Southern Africa,” reads a tropical Cyclone Eloise Flash Update No.11 released on 28 January.

“Although the damage wrought by Eloise to date has been less widespread than Tropical Cyclone Idai in 2019, homes, crops and infrastructure in Mozambique, Zimbabwe, Eswatini and South Africa have been damaged or destroyed,” it adds.

In Mozambique at least 20,558 houses have been destroyed 460 classrooms and 86 health centers. UNICEF estimates that about 90,000 children in central Mozambique are likely to need humanitarian assistance in the aftermath of Cyclone Eloise, including those displaced and those at risk of contracting waterborne diseases.

In Zimbabwe, at least 349 houses are reported to have been destroyed or partially damaged by Eloise, according to UN International Organization for Migration (IOM).

According to Paul Dillon, a spokesperson for IOM initial assessments indicated that over half of the 71 resettlement centres sheltering people displaced by the 2019 Cyclone Idai, are in areas affected by Cyclone Eloise.

South Africa has witnessed multiple severe weather events were reported in western Free State and north-eastern Northern Cape between 26 and 27 January, including damage to roads, widespread flooding and evacuations of communities and people stranded by rising floodwaters, according to the South African Weather System (SAWS). SAWS estimates that he heavy rains may cause “extensive damage” to crops and waterlog farmlands, with potential to significantly impact agricultural production.

Cyclone Eloise is the third tropical storm to have hit Mozambique after Cyclone Kenneth and Cyclone Idai in 2019.