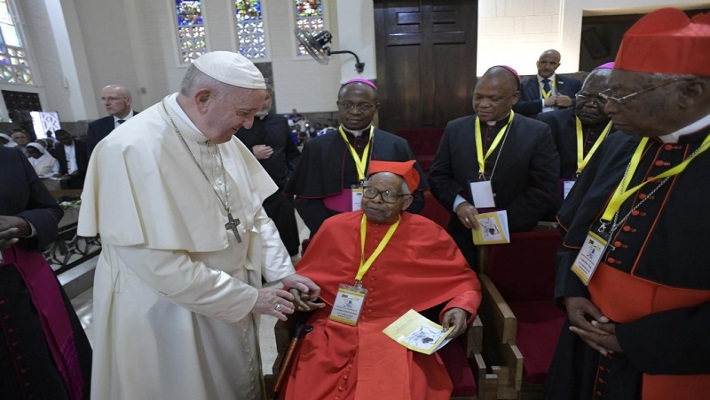 MAPUTO, OCTOBER 5, 2021 (CISA)-Pope Francis has mourned the death of Alexandre José Maria Cardinal dos Santos, O.F.M., Archbishop Emeritus of Maputo, in a telegram of condolence sent to Archbishop Francisco Chimoio O.F.M. cap of the Catholic Archdiocese of Maputo on October 1.

“Having received with sorrow the news of the death of my brother, Cardinal Alexandre José Maria dos Santos, I wish to express solidarity with the bereaved family and all those especially in the archdiocese of Maputo, who have benefited from the service of this pastor,” reads the telegram of condolence.

“I entrust this indefatigable servant of the gospel and the church to the Lord who guided him throughout his life and ask that he be welcomed in the heavenly Jerusalem, to which I invite the participants in the exequial liturgy for Don Alexandre to raise their hearts. I join in the spirit in giving those present and those who mourn his passing the comfort of the apostolic blessing,” says Pope Francis.
Cardinal dos Santos died on Wednesday, September 29, at the age of 97.

President Filipe Nyusi of Mozambique extolled him as one of the country’s “best sons who stood out for his commitment to the good of humanity, regardless of social position, race, or other forms of distinction.”

“Humanism, a high sense of ethics and citizenship made Cardinal Dom Alexander a fighter of the world and to the world, who bet on educating citizens as a means of promoting equality and brotherhood among men,” the president eulogized.

President Nyusi lauded his contribution to education for his leadership in establishing Catholic institutions of higher learning and for his patriotism and contribution to the country’s peace process.

“His work and legacy, built on his long journey, would not fit a simple message. Therefore, it is up to us to honour and value his accomplishments, consolidating peace, concord, equality love to the neighbour,” added President Nyusi.

The late Cardinal was appointed archbishop on December 23, 1974, ordained and installed Archbishop of Lourenço Marques whose name later changed to Maputo on March 9, 1975. Pope John Paul II elevated him to the College of Cardinals on June 28, 1988. He retired as Archbishop of Maputo on February 22, 2003.

Cardinal dos Santos was the first priest, the first bishop and the first cardinal to come from Mozambique.