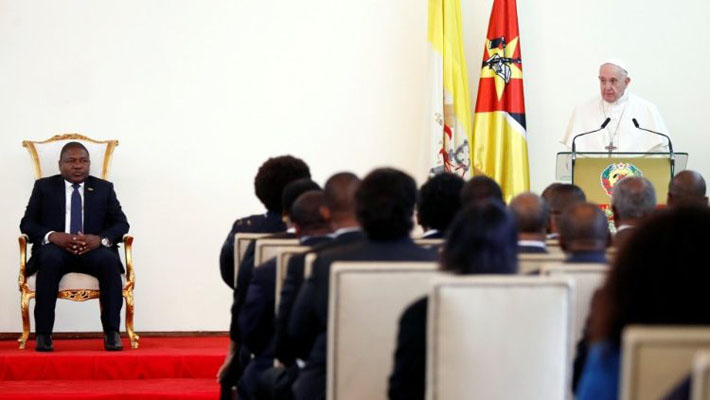 MAPUTO, SEPTEMBER 6, 2019 (CISA)-Pope Francis has joined the international community in expressing gratitude for the peace efforts made towards building bridges and reconciliation in Mozambique.

In his address to the Government, Diplomatic Corps and representatives of Civil Society in Maputo on September 5, during his Apostolic Journey, Pope Francis lauded the peace accord signed between President Filipe Nyusi and the leader of Mozambican National Resistance (RENAMO), Mr Ossufo Momande, who jointly attended the pope’s address.

“How much has happened since the signing of the historic treaty that sealed the peace and has gradually begun to bear fruit!” the pope said.

“Those first fruits sustain hope and the determination to make your future not one of conflict, but of the acknowledgement that you are all brothers and sisters, sons and daughters of a single land, stewards with a shared destiny,” he added.

He lamented how thousands of people were forced to flee the country to find security noting that, “In the course of these years, you have come to realize how the pursuit of lasting peace – a mission incumbent upon all – calls for strenuous, constant and unremitting effort.”

“Peace has made possible the development of Mozambique in a number of areas.  Promising advances have been made in the fields of education and health care,” he said, I encouraging them to “continue your efforts to build up the structures and institutions needed to ensure that no one feels abandoned, especially the young who make up so great a part of your country’s population.”

Pope Francis also expressed his closeness and solidarity with those struck by cyclones Idai and Kenneth, whose effects continues to be felt in the affected parts.

“I will not be able to go personally to visit you, but I want you to know of my own participation in your anguish and suffering, and the commitment of the Catholic community to respond to this most difficult situation,” he said.

Pope Francis arrived in Mozambique on Wednesday September 4, at night and was officially welcomed by President Filipe Jacinto Nyusi, along with the First Lady and a delegation of Bishops.