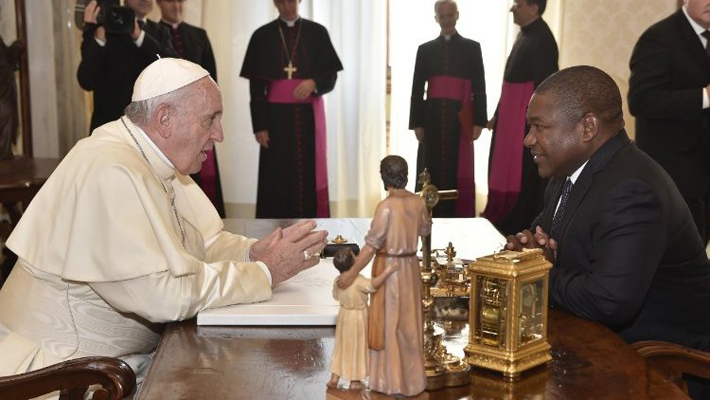 ROME, SEPTEMBER 21, 2018 (CISA) – President Filipe Jacinto Nyusi of Mozambique met Pope Francis where they discussed the ongoing peace process in the country during his visit to Vatican.

According to a statement issued by the Holy See Press Office, President Nyusi accompanied by First Lady Isaura Nyusi and other government officials were received by Pope Francis on Friday September 14.

“The socio-political situation of the nation (Mozambique) was then discussed, as well as the process of national reconciliation currently underway, with the hope that a stable and lasting peace may be reached,” reads the statement.

In his interview with Vatican News after meeting the Pope, President Nyusi said that,“The Holy Father told me to focus not on what separates us but on what unites us.”

This is in reference to an agreement announced in July between President Filipe Nyusi and the opposition RENAMO leader Ossufo Momade over the disarmament and integration of former RENAMO rebels into the national police and army.

“We are now in the phase of disarmament, demobilization and integration of RENAMO’s armed men. We hope this will lead to an effective and lasting peace where all are equal,” he said.

They also discussed relations between the Holy See and Mozambique and the valued contribution of the Catholic Church in several sectors of society with reference to the bilateral agreement signed in 2011 to facilitate the activity of the Church in the country.

“The conversation continued with an exchange of opinions on the fight against poverty and corruption, as well as economic collaboration between Mozambique and other countries,” reported Vatican News.

When asked about the concerns raised by the Catholic Bishops of Zimbabwe in their pastoral letter concerning land conflicts and the alleged evictions of peasants, the president said that the state had not sold any land instead said the government had launched the safe land project where land rights and use are protected.