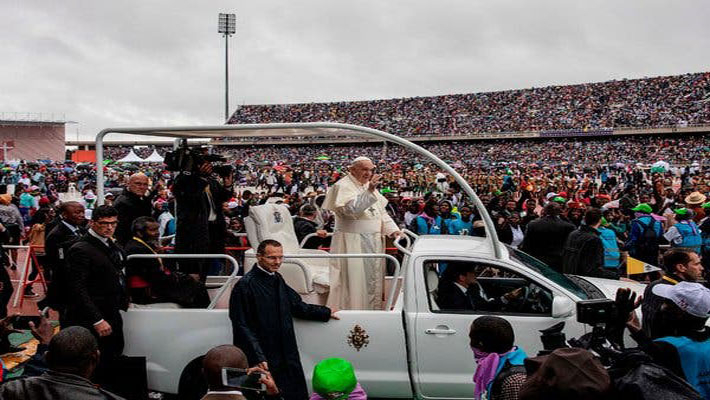 “No family, no group of neighbours, no ethnic group, much less a nation, has a future if the force that unites them, brings them together and resolves their differences is vengeance and hatred,” Pope Francis told faithful gathered for public Mass at Zimpeto Stadium in capital Maputo.

“We cannot come to terms and unite for the sake of revenge, or treating others with the same violence with which they treated us, or plotting opportunities for retaliation under apparently legal auspices,” Pope Francis said.

The Pope was speaking Friday, 6 September 2019 in his homily during the second day of his apostolic visit to Mozambique.

“We have heard a passage of the Sermon on the Plain, taken.  After choosing his disciples and proclaiming the Beatitudes, Jesus adds: “But I say to you that listen, love your enemies” (Lk 6:27).  Today, his words are also addressed to us, who hear them in this Stadium,” he said.

The Pope noted that while it is not easy to speak of reconciliation while wounds are still open from the years of conflict, or to take a step towards forgiveness, which is not the same as ignoring pain or giving up our memories or ideals (cf. Evangelii Gaudium, 100). “…Jesus Christ is calling us to love and to do good.  This means much more than simply ignoring the persons who harmed us, or trying to avoid encountering them.  Jesus commands us to show an active, impartial and extraordinary benevolence towards those who have hurt us,” he said.

“Nor does Jesus stop there.  He also asks us to bless them and to pray for them.  In other words, to speak of them with words of blessing, with words of life not death, to speak their names not in insult or revenge, but to establish a new bond which brings peace.   It is a high standard that the Master sets before us!”

Pope Francis called for reconciliation in the country saying, “Overcoming times of division and violence calls not only for an act of reconciliation or peace, in the sense of an absence of conflict.  It also calls for daily commitment on the part of everyone to an attentive and active concern that makes us treat others with the same mercy and goodness with which we ourselves want to be treated.”

In inviting us to do this, Jesus wants to end forever that common practice of being Christians yet living under the law of retaliation.  We cannot look to the future, or build a nation, an equitable society, on the basis of violence.  I cannot follow Jesus if I live my life by the rule of “an eye for an eye, and a tooth for tooth”.