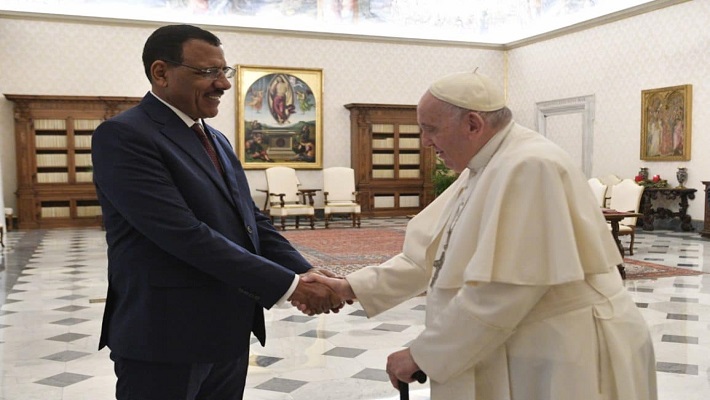 VATICAN, DECEMBER 6, 2022 (CISA) – Pope Francis  has received in audience His Excellency Mohamed Bazoum, the President of the Republic of Niger, at the Vatican Apostolic Palace on December 3.

“During the cordial talks in the Secretariat of State, the good relations between the Holy See and Niger were emphasized, and some aspects of the social and economic situation of the country, in particular the theme of education, were discussed,” read part of a communiqué by the Holy See Press office dated December 3.

According to the communiqué, “the conversation continued with an exchange of opinions on current international affairs, with particular reference to security issues and migratory phenomena in the countries of West Africa and the Sahel region.”

The Catholic Church in the Sahel Region, Mali, Burkina Faso and Niger, is a leading party in addressing social divisions and violence fueled majorly by high rates of poverty and youth unemployment.

According to Catholic Relief Service (CRS),  In November 2019, the Catholic Church in West Africa through its religious leaders from five countries  and with support from CRS, launched the Sahel Peace Initiative to promote locally led peace-building activities and respond to the millions of people displaced from their homes without livelihoods or enough food as a result of growing violence and unrest in the region.