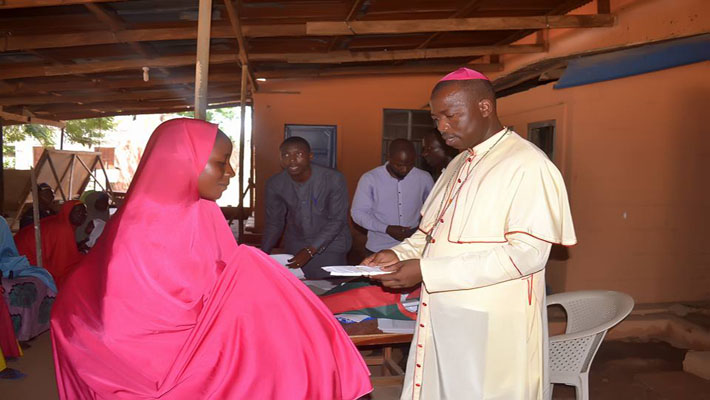 YOLA, OCTOBER 18, 2019 (CISA)-The Catholic Bishop of Yola, Most. Rev. Dr. Stephen Dami Mamza has appealed to Nigerians to put aside their religious differences and assist those who have been affected by Boko Haram.

Speaking to journalists during his visit to Shuwa, Madagali Local Government Area of Adamawa State, the bishop urged the community to help women who have been recently released by Boko Haram as they integrate with the community.

“He also appealed to members of the community to continue to treat the women kindly and with love so as to enable them feel welcomed in order that they will be able to fully integrate with them,” reported Catholic bishops Conference of Nigeria (CBCN).

During the visit, the Bishop gave a cash donation of ₦50,600 to women who were freed from Boko Haram. The donation was meant to help them begin live through farming or business.

According to CBCN, 70 women both Christians and Muslims will benefit from the donation.

Hundreds of young women have been abducted by the group to become brides to their fighters and in some cases suicide bombers.