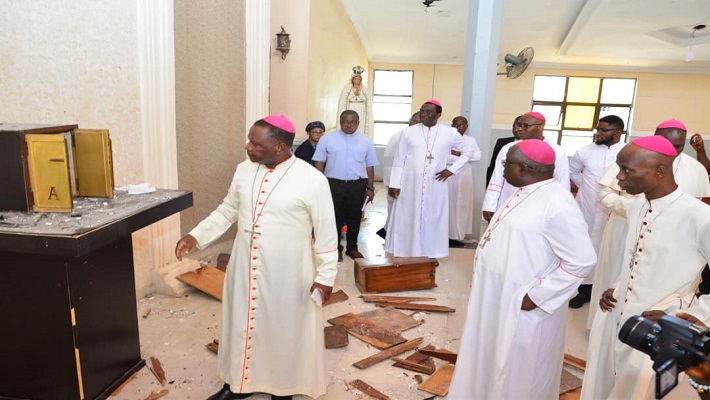 OWO, JUNE 14, 2022 (CISA)-The Catholic bishops of Ibadan and Lagos Ecclesiastical provinces in solidarity with the diocese of Ondo have visited St Francis Catholic Church in the town of Owo, the scene of the Sunday, June 5 attack, which left at least 40 dead and around 60 injured.

Their visit to Owo began at the bishop’s residence to the scene of the massacre to the King’s palace; to the governor’s house and ended at the hospitals where survivors are still hospitalized.

Speaking to the press during the visit, Archbishop Dr Gabriel ‘Leke Abegunrin of the Catholic Archdiocese of Ibadan condemned the act describing it as a fight against God and that God will take up the fight against the evil doers.

“He charged the government to pull all efforts together to make sure anyone involved in this horrible killing of unharmed innocent be brought to face timely justice. On this note, he commended the Governor, Arakunrin Rotimi Akeredolu for his bold steps and promise made in ensuring that the perpetrators are apprehended,” reads a write-up shared by the Catholic Diocese of Ondo.

While also condemning the killings, Bishop Jude Ayodeji Arogundade of Ondo suggested that something must be done in ensuring a non-repeat of the incident.

To have a befitting burial for the dead, the bishop asked for a piece of land from the State, located at a strategic place in Owo, where a park can be built and beautified in a way that gives some dignity to humanity even in death.

“We have to let these evil doers know that we cannot be defeated and that when we come out, we come out strong. Getting a place of burial would make a statement that shames the perpetrators of this havoc,” he remarked.

Governor Oluwarotimi Akeredolu of Ondo State while thanking the bishops for the solidarity visit reiterated his assurance that the gunmen will be trailed, apprehended and face the law.

Governor Akeredolu of Ondo State has extended the mourning period in the state to Wednesday. The extension was a result of the resolution of the Southwest Governors’ Forum to observe a 3-day mourning period, starting from Monday to Wednesday across all the Southwest states. St Francis Catholic Church plans Friday, June 17, as the day for the funeral Mass of the victims of the killings.