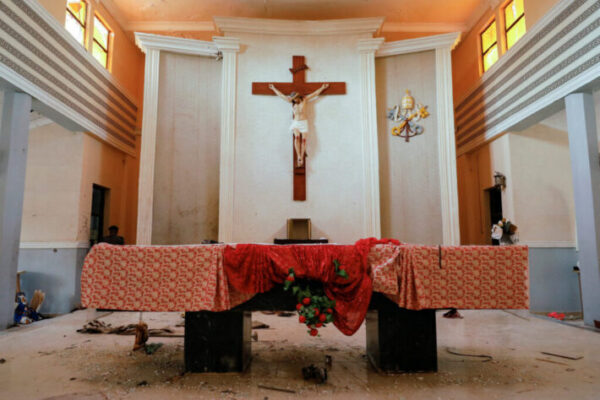 OWO, JUNE 5, 2022 (CISA) – The Catholic Bishops Conference of Nigeria (CBCN) has condemned the killings of worshippers at St Francis Xavier Catholic Church in Ondo Diocese, Nigeria, during Mass to commemorate the Day of Pentecost on Sunday, June 5.

At least 50 worshippers who attended the mass, were reported dead.

The President of CBCN and Archbishop-Elect of Owerri, Most Rev Lucius Ugorji while reacting to the news on Sunday night said, “I received the news of the bloody attack unleashed on innocent worshippers at St. Francis Catholic Church Owo in the Diocese of Ondo on Pentecost Sunday with great shock and sadness. Nowhere seems to be safe again in our country; not even the sacred precincts of a Church,” adding, “We condemn in the strongest term the spilling of innocent blood in the House of God. The criminals responsible for such a sacrilegious and barbaric act demonstrate their lack of the sense of the sacred and the fear of the God.”

The prelate urged the government to expeditiously hunt the perpetrators of the heinous act and bring them to book pointing out that, “if the government fails to act decisively on such a grave matter, it would be encouraging the descent of anarchy…”

“At this dark and trying time, we commiserate with the Diocese of Ondo and implore God to grant eternal rest to the dead, speedy recovery to the wounded and consolation to families mourning the death of their beloved ones,” said Archbishop Ugorji.

According to reports by local media, “At about 11:30 am [10:30GMT] on Sunday, gunmen with explosives stormed St Francis Xavier Catholic Church in Owo town in Ondo State and opened fire, killing at least 50 people.”

“It is so sad to say that while the Holy Mass was going on, unknown gunmen attacked St Francis Catholic Church, Owo Ondo State leaving many feared dead and many others injured and the church violated,” reads a statement by the Catholic Diocese of Ondo’s Directorate of Social Communications, dated June 5.

“At this point in the history of our dear country Nigeria, we need God’s ultimate intervention to restore peace and tranquillity…We turn to God to console the families of those whose lives were lost to this distressing incident, and we pray for the departed souls to rest in peace,” read the statement in part.

The statement signed by Rev Fr Augustine Ikwu, the Director of Social Communications further revealed that “the identity of the perpetrators remains unknown while the situation has left the community devastated.”

The diocese also confirmed that security agencies have been deployed in the community to handle the situation.