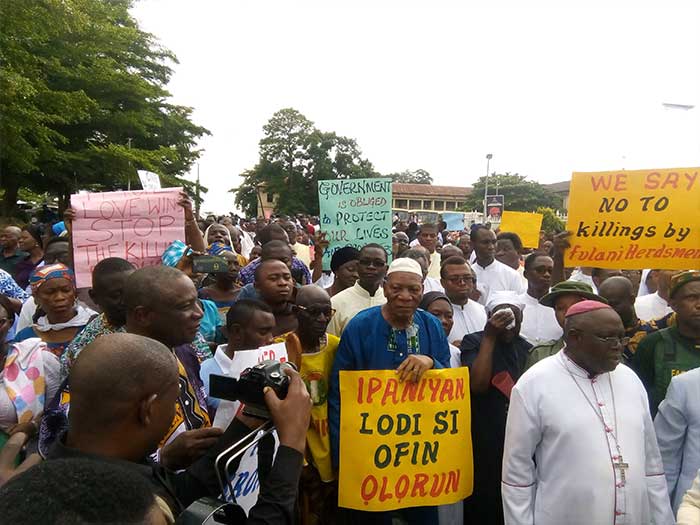 BENIN CITY, MAY 22, 2018 (CISA)-Clergy, religious and the laity of the Catholic Archdiocese of Benin, Edo State, today joined other Catholic faithful in the country on a peaceful protest march against the killings of two priests and 17 worshipers at St. Ignatius Catholic Parish in Ukpor- Mbalon in Benue State.

The protest dubbed “March for life” follows a directive by the Catholic Bishops Conference of Nigeria, CBCN, to all Catholic faithful in the country to hold a prayerful and peaceful rally in solidarity with the Benue people, the protest coincides with the funeral of slain priests and faithful.

The statement made by Catholic Bishops Conference of Nigeria in the wake of the April 24 killings read in part “…As leaders, we have consistently asked our people to remain peaceful and law abiding even in the face of the worst form of provocation. Today, we Christians feel violated and betrayed in a nation that we have all continued to sacrifice and pray for…”

The two priests Fathers Joseph Gor and Felix Tyolaha and 17 faithful were killed by Fulani herdsmen, who stormed a daily Mass at Saint Ignatius Church on the morning of April 24.Reported the Catholic News Service of Nigeria.

He urged President Muhammadu Buhari to do all in his capacity to ensure that the lives of Nigerians are safe. He also called on perpetrators of evil to desist from it and not incur the wrath of God.

Other states where the protests were held in the country included Edo, Oyo, Benue, Lagos, Kaduna, Adamawa and Kwara.

The protesters carried placards with pro-life messages and marched peacefully on the streets.