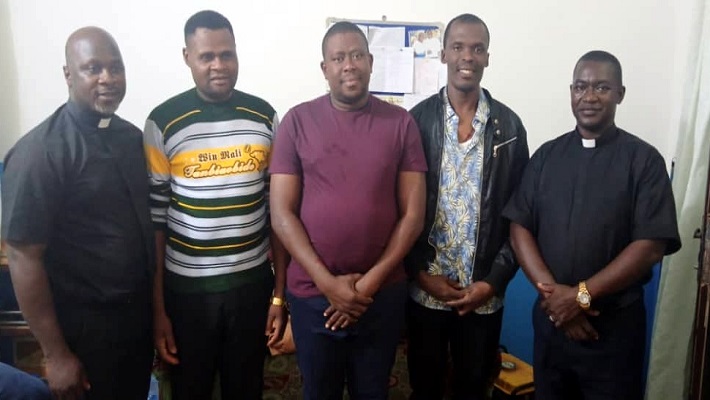 KAFANCHAN, OCTOBER 15, 2021 (CISA) – “With hearts filled with joy, we raise our voices in a symphony of praises as we announce the return of our Three Major Seminarians, who were abducted by armed persons from the Chapel of the Seminary at Christ the King Major Seminary, Fayit Fadan Kagoma in Jema’a Local Government Area, Kaduna State, on Monday 11 October 2021. Barely 48 hours after their kidnap, our beloved brothers were released by their abductors,” reads an emphatic statement dated October 13, by Rev Fr Emmanuel Uchechukwu Okolo, the Chancellor of the Catholic Diocese of Kafanchan.

The three seminarians had been kidnapped on the evening of Monday, October 11, during an attack at the Christ the King Major Seminary in Kafanchan, Kaduna State.

Fr Uchechukwu Okolo had reported that according to the narrative by the seminary security agents, the law enforcement personnel and a headcount done after mass, “it was confirmed that three Theology Four seminarians were abducted. These seminarians belong to the Apostles of Divine Charity and the Little Sons of the Eucharist Congregation.”

In an earlier communication on October 12, addressed to the Catholic Bishops Conference of Nigeria (CBCN), the Metropolitan Archbishop of Kaduna Province, the clergy and all faithful of the Catholic Diocese of Kafanchan, Fr Uchechukwu Okolo revealed that about six other seminarians sustained various injuries in that attack.

“At the time of the attack 10 formators including the Rectors of the Seminary and the Institute, 132 seminarians, 6 non-seminarians, one female non-academic staff and one steward were on ground. Six seminarians sustained various degrees of injuries. A dispatch of soldiers of the Operation Safe Haven (OPSH) was on ground to accompany some formators and the injured seminarians to Salem Hospital in Kafanchan. There, they were treated and discharged after being confirmed to be stable,” read the letter by Fr Uchechukwu Okolo.

However, the Chancellor of Kafanchan Diocese thanked everyone for their prayers and support in ensuring the seminarians were released. He also urged the Catholic churches to organize Thanksgiving masses for the successful release of those who are still abducted.