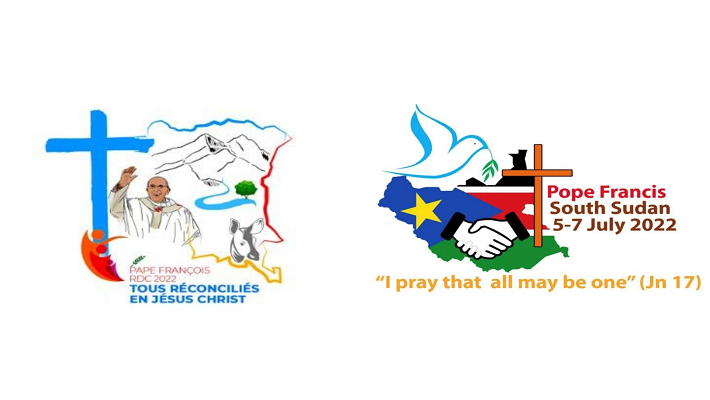 VATICAN, MAY 31, 2022 (CISA) – Christened “Apostolic Journey of His Holiness Pope Francis to the Democratic Republic of Congo and … Ecumenical Peace Pilgrimage to the South Sudanese Land and People,” in a publication by Holy See Press Office on May, 28. The Holy Father is set to depart Rome/ Fiumicino International Airport at 09:30 and land at Kinshasa International Airport, DRC, at 16:00, on Saturday, July 2, 2022, marking the start of his 6-day visit to the East African Countries.

The pope upon his arrival in DRC will have an official welcome at the airport after which he will head for a welcome ceremony at the “Palais de la Nation” in Kinshasa where he is scheduled to meet President Felix Tshisekedi in the “Salle Présidentielle” and then later with authorities and diplomatic corps in the garden of the “Palais de la Nation”.

The pontiff will end his Saturday engagements by meeting Jesuits at the Apostolic Nunciature in Kinshasa. On July 3, he will celebrate Mass at Ndolo Airport and then meet with bishops, priests, religious, consecrated persons, and seminarians in the Cathedral “Notre Dame du Congo”, both activities will be in Kinshasa.

On July 4, he will fly to Goma to meet with the victims of the violence in Beni and the east of Congo at the Goma Diocesan Welcome Centre. He will end his apostolic visit to the country on July 5, with a meeting of young people and catechists in Martyrs’ Stadium in Kinshasa.

The Holy Father, will on the same depart from Kinshasa “Ndjili” International Airport to Juba, South Sudan, where he will be accompanied by the Archbishop of Canterbury, Most Rev. Justin Welby and the Moderator of the General Assembly of the Church of Scotland, Rt. Rev Lord Wallace.

On July 6, he will visit the internally displaced people at the IDPs Camp in Juba, hold a private meeting with Jesuits in South Sudan and then later meet with bishops, priests, religious, consecrated persons, and seminarians in the Cathedral of Saint Therese in Juba.

The pope will crown the first visit of a sitting pontiff to South Sudan on July 7, with the celebration of Holy Mass at “John Garang” Mausoleum in Juba and later in the afternoon, depart from Juba International Airport to Rome.