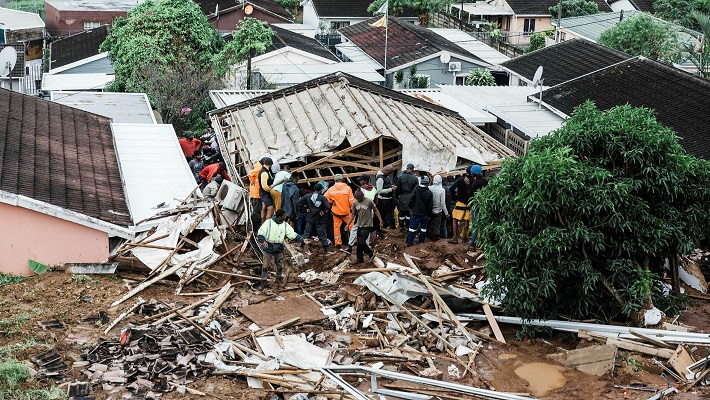 DURBAN, MAY 17, 2022 (CISA) – Archbishop Mandla Jwara, CMM, Archbishop of Durban, Archbishop Peter Wells, the Apostolic Nuncio to Southern Africa and His First Secretary, Monsignor Dario Paviša on Saturday, May 14, visited various areas in Kwa Zulu Natal that have been affected by floods.

Archbishop Jwara, who is the President of Caritas Durban, and in the company of the papal diplomats visited about three parish communities including St James Lamontville, Durban South Deanery where they distributed to over 100 families, nutritious relief food packages.

According to reports by the Southern African Catholic Bishops Conference (SACBC), Archbishop Wells conveyed the Pope’s prayer to victims of the floods in South Africa, especially in Durban and the Eastern Cape. “He noted that Pope Francis promised his prayers and his concern for what is happening in the flooded affected areas. Archbishop Wells also reminded that the Holy Father had also been involved since Covid started sending money for assistance in food parcels because he is concerned about the food security in South Africa,” read the report.

This happened against the backdrop of another Caritas workshop that took place between May 13 and 14 in Kimberly. The workshop Organised by Rt Rev Duncan Tsoke, Bishop of the Catholic Diocese of Kimberly in partnership with Caritas South Africa, SACBC Migrants and Refugees Office and the Jesuit Refugees Service (JRS), involved the clergy, 28 in number, and 51 Volunteer Parish representatives who collectively looked at establishing and structuring Caritas Kimberly as well as discussing Pastoral Care for Migrants and Refugees.

According to SACBC, “The presenters of the workshop were Sr. Maria Rissini from Caritas South Africa together with the SACBC Migrants and Refugees Office and Fr. Rampe Hlobo from the Jesuits Refugee Service. Sr. Maria started by presenting the history of Caritas and the guidelines it follows. She then presented the structure and what constitutes the overall Caritas network…”

Sr. Maria spoke about the organizational structure of the diocesan Caritas and sub-offices at the parish level, safeguarding policy and protocol of recruitment stating that Caritas South Africa and Diocesan Caritas adopt the policy of Caritas Internationalis and SACBC on Protection and Safeguarding of abuse and exploitation of Children and Vulnerable Adults.

Caritas South Africa focuses on economic justice, peace and reconciliation, human development and climate change. It is committed to providing people from every faith, origin and background, with the means to realize their full potential and become contributors to the common good.