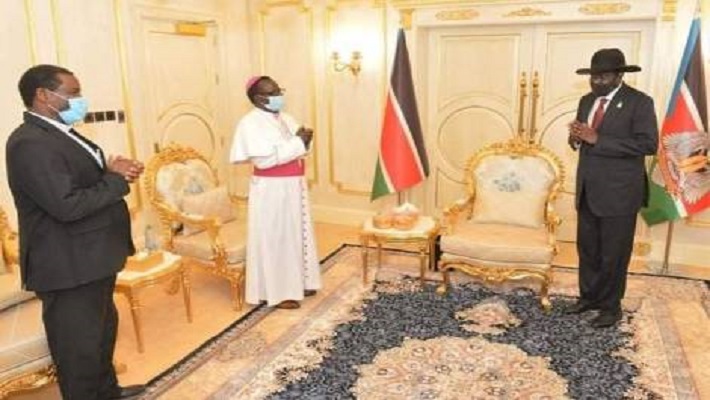 “A very productive and successful meeting,” Bishop Hiiboro said about the meeting that also saw them bless the president’s new office.

“So we met him on Tuesday to assure him of our closeness as church leaders and as representatives from the Bishops conference, we went on behalf of the people of South Sudan to assure him of collaboration, and our readiness to collaborate with him and to work with him and with the government and all of them for peace and growth of our people in the Republic of South Sudan,” Bishop Hiiboro said.

The two prelates also informed the president about the feelings of the people, the desire for people among the people, and the sufferings and all that is going on within the country because of war and conflict.

“So we told him that he was on the right track and should continue working hard with his colleagues in order to be able to consolidate peace in the country. We were able also during that meeting to stress the fact that the implementation of this peace agreement though we know it is complex and difficult, they should not give in to war, they should never take the country back to war but rather work tirelessly to be able to establish peace in the Republic of South Sudan.”

During the meeting, the bishops congratulated President Kiir for implementing the peace agreement and forming the government of national unity. They lauded him for reducing the then 32 states to 10 states as agreed in the peace agreement.

“We also went to thank him for making peace with the fighting forces and rebels in the Republic of Sudan which was signed here in Juba and this is a great sign to make peace in the neighbouring country the piece of Sudan is the peace of South Sudan,” Bishop Hiiboro said.

He noted that the audience was also an opportunity for them as religious leaders to encourage the president and his collaborators, the opposition, and others to continue implementing the peace agreement, though slowly but to the later.

The two prelates assured the president of the Church’s readiness to continue collaborating with the government and other partners, working for peace to ensure that South Sudan become stable.

“We reminded him that of course there are a lot of inter-tribal problems within the country, hunger, the displacement of people, the refugees; all this is upon us and upon him and therefore, we need as a country to stabilize our nation.”

According to Bishop Hiiboro, President Kiir assured that he will never take the republic of South Sudan back to war, learning from the current financial difficulties the country is going through derailing the development plans.