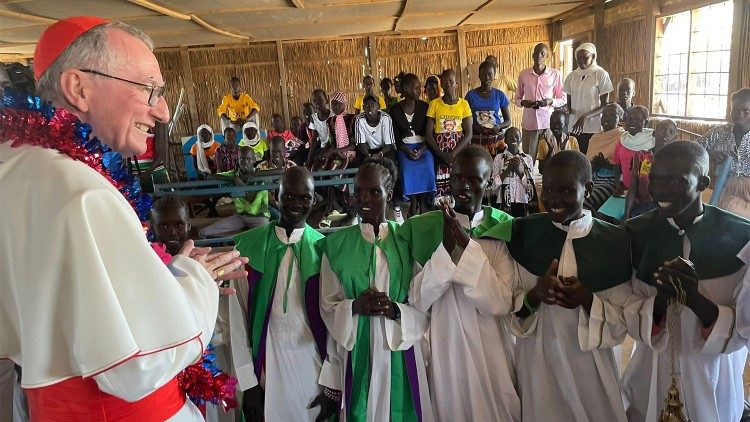 BENTIU, JULY 12, 2022 (CISA)-Bishop Stephen Nyodho Ador Majwok of Malakal has acknowledged the pope’s closeness with victims of war and natural disasters as portrayed by the Vatican’s Secretary of State, Cardinal Pietro Parolin when visited the camp of Bentiu.

Bentiu camp hosts families that were forced out of their homes after the civil war broke out in 2013. Although some sought to return home after the peace agreement that was signed in 2018, another huge number returned after massive flooding in parts of South Sudan in 2021. The camp has about 140,000 people.

Cardinal Parolin during the visit to South Sudan celebrated Mass in the camp reminding those who live there that they are “always loved by God,” despite the difficulties they face. He said his presence is to show solidarity with the Pope and solidarity of the Universal Church with their suffering and daily life.

“Our history makes us cry out to the Lord, makes us lay before His altar the injustices, abuses, and persecutions that too many of us still suffer; but we know that this cry is heard by God and redeemed, a cry that He will transform into a song of joy, if we know how to ask forgiveness for our persecutors and pray for those who hurt us,” Cardinal Parolin told the victims during the visit.

According to Bishop Majwok, the visit on July 6, was historic and unforgettable. He said, “it is the day the faith of the people has been touched, the spiritual life is going to change. The presence of his eminence in the diocese of Malakal and in particular with the people who have been affected by a lot of atrocities; war and natural disasters has a very big significance in their lives.”