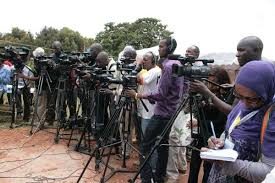 JUBA, MAY 8, 2018 (CISA)-Diplomats in South Sudan have urged the government to review the constitution so as to promote freedom of expression.

“We all support the fundamental rights of journalists and the people of South Sudan to freedom of expression. It is important that, what is going on in the country and what people are saying about the happenings is accurately reported, so that the people of South Sudan can make their own choices and have their own views about the future of the country,” said Alison Blackburne British Ambassador.

Blackburne spoke in a joint press statement issued on May 5 with Ambassadors Geert Geut of Netherlands and Gunnar Andres Holm of Norway after touring the Association for Media Development in South Sudan (AMDISS).

“Every occasion that we get is the need for South Sudanese government to respect the freedom of expression, since they are now an independent country, a member of United Nations. The membership of the United Nations brings with it the obligation to respect this right,” said Geert Geut.

The Norwegian Ambassador, Gunnar Andres Holm also believes that it is the government’s responsibility to ensure that all rights are observed and respected adding that, any democratic society requires the government to respect the people’s rights.

“If you want a society where the best idea prevails, then freedom is crucial to have that right to sort of exchange ideas, to criticize bad ideas and to basically adjust the course”, says Ambassador Andres.

They also urged journalists to be professional in their reporting especially at this time when the country is going through a series of conflicts.