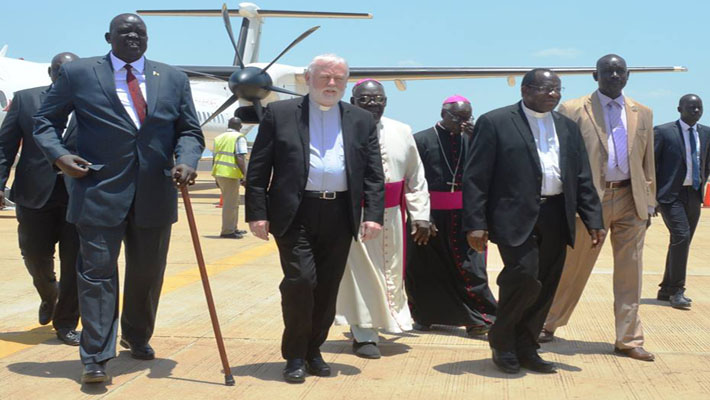 JUBA, MARCH 22, 2019 (CISA)-The Vatican’s Secretary (Relations with States) of the secretariat of State, Archbishop Paul Richard Gallagher is in capital Juba to familiarize himself with the situation of the South Sudanese people.

“I have come here in the name of the holy father Pope Benedict and on behalf of Cardinal Parolin the secretary of state. It is a great pleasure to be here in Juba. I am very grateful for the warm welcome that has been accorded me,” he told the press.

During his five-day visit, Archbishop Gallagher is expected to meet Catholic Bishops and other leaders of the other churches and top government officials including President Salva Kiir.

“I would like to see for myself what South Sudan is like, how the life is for the south Sudanese and to be engaged with the authorities. We have various meetings with the leaders of the country and also with members of the Christian churches,” he added.

As the catholic University of South Sudan celebrated its 10th anniversary, March 22, Archbishop Gallagher blessed and laid the foundation stone for Institute for Justice and Peace Studies. The event was attended by Archbishop Hubertus Matheus Maria van Megen, the new Nuncio to Kenya and South Sudan.