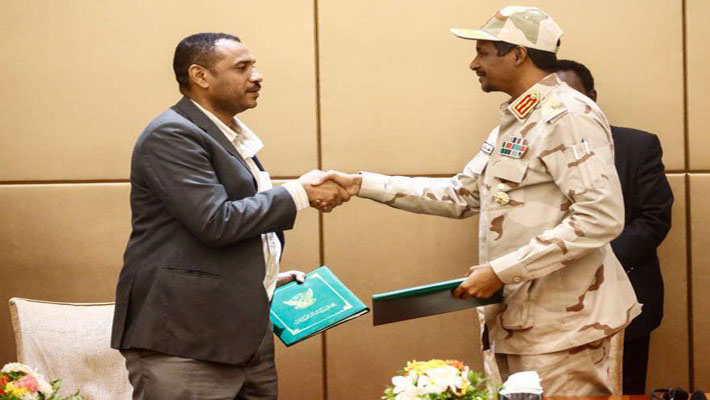 KHARTOUM, AUGUST 20, 2019 (CISA)- The Transitional Military Council (TMC) — the armed forces that have ruled Sudan since April, and the Alliance for Freedom and Change, the umbrella organization representing the pro-democracy protesters, on August 17 signed a landmark power-sharing deal in Khartoum.

The deal was signed by General Mohamed Hamdan Dagalo, deputy head of the military council; Lieutenant General Abdel Fattah Abdelrahman Burhan, chairman of the Transitional Military Council; and Ahmed al-Rabie for the Alliance for Freedom and Change umbrella group of pro-democracy protesters.

“I invite everyone to make this day a new stage of getting over the bitterness of the past and looking to the future,” Lieutenant General Abdel Fattah al-Burhan said at the ceremony, according to Reuters.

The power-sharing deal creates a joint military and civilian sovereign council to rule for a little over three years until elections can be held.

Under a power-sharing agreement, the sovereign council will include five members selected by the TMC, five picked by the main opposition coalition, and one agreed upon by both sides.

The agreement further states that a military leader will head the 11-member council for the first 21 months, followed by a civilian leader for the next 18 months. It would also establish a cabinet appointed by the activists and a legislative body.

The ceremony was attended by heads of states, prime ministers and dignitaries from several countries, including Ethiopian Prime Minister Abiy Ahmed and President Salva Kiir of South Sudan.

Former President Omar Al Bashir, who was overthrown by the military in April, was arraigned in court on August 19 on charges of corruption.