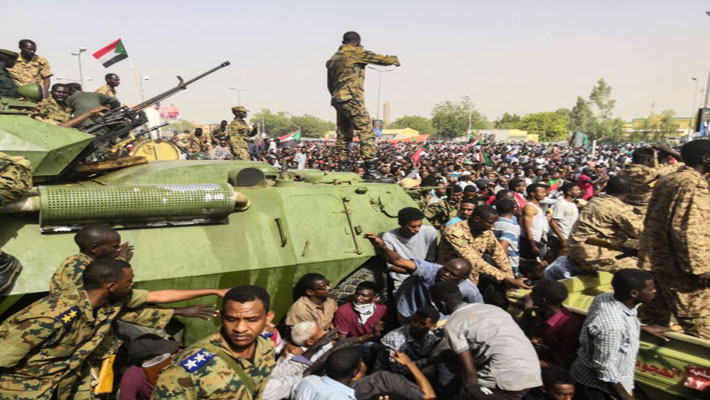 KHARTOUM, APRIL 12, 2019 (CISA)-The Sudan Minister for Defence, Awad Ibn Ouf has been sworn in as chief of new military council that takes over from the ousted President Omar al-Bashir.

Awad Ibn Ouf will now head the new military rule tasked with transferring power into the hands of civilians, after spirited demonstrations which inflicted the downfall of Mr Bashir.

The African Union has in the meantime called on citizens of Sudan to exercise calm and restraint as the country undergoes transition of power.

Moussa Faki, the Chairman of AU Commission in a statement released April 12, asked them to, “Respect the rights of citizens, foreign nationals and private property in the interest of the country and its people.”

He said the AU’s Peace and Security Council would meet swiftly to consider the situation and take the appropriate decisions.

Moussa Faki proposed an, “Inclusive dialogue to create conditions that will make it possible to meet the aspirations of the Sudanese people to democracy, good governance and well-being and restore constitutional order as soon as possible.”

“The military take-over is not the appropriate response to the challenges facing Sudan and the aspirations of its people,” the statement reads.

President Omar al-Bashir was overthrown and arrested by the army on Thursday April 12, by the Sudanese army after months of street protests.

According to an announcement made by Sudan’s Minister of Defence, Awad Ibn Ouf on state TV, the country has been suffering from, “Poor management, corruption and absence of justice.” He apologized for the killing and violence that took place.

He said the army would oversee a two-year transitional period followed by elections. He also said a three-month state of emergency was being put in place.