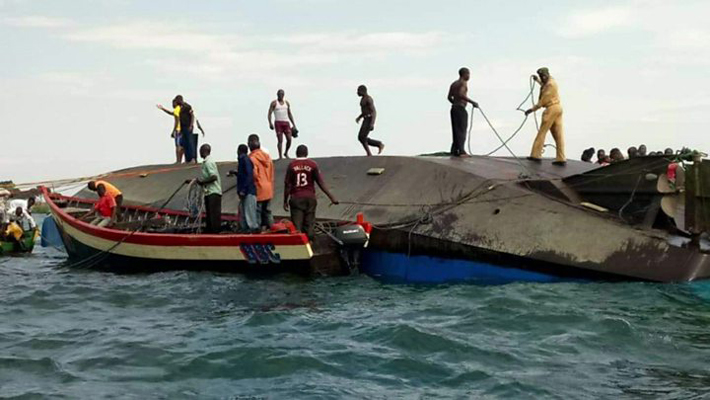 MWANZA, SEPTEMBER 25, 2018 (CISA) – The council of Tanzania Episcopal Conference (TEC) has sent a message of condolence to Tanzanians following the Mv Nyerere ferry accident that left 224 dead and a number injured.

Speaking on behalf of the TEC, Bishop Gervas Nyaisonga assured Tanzanians that the Church is praying for the deceased to rest in peace and wished the injured a quick recovery.

“We empathize with the injured and survivors of the accident. We pray that God grants them a quick recovery,” said Bishop Nyaisonga.

TEC also acknowledged and appreciated the efforts of fishermen, police officers, scouts, and other rescuers present at the scene of the tragedy.

“We urge everyone to receive this disaster in faith. Let us leave to God things that are beyond our abilities and take responsibility for those within our abilities,” remarked the Bishop.

According to the transport minister of Tanzania, 265 people were aboard the ferry when it capsized despite the ferry having a capacity of 100 people. Out of the 224 people who died, 126 were women, 71 men, 17 girls, and 10 boys. 41 people survived the accident.

The ferry sank on September 20 in Lake Victoria around the shores of Ukara, Ukerewe District Mwanza and burial ceremonies kicked off on September 22 in the same location of the accident.

On September 21, 2018 Pope Francis sent a message of condolence to the victims of the ferry accident.

The telegram signed on his behalf by Cardinal Secretary of State, Pietro Parolin read, “Saddened to learn of the tragic ferry accident on Lake Victoria near the shore of Ukara Island, His Holiness Pope Francis expresses his heartfelt solidarity with those who mourn the loss of their loved ones and who fear for the lives of those still missing. He invokes the divine blessings of strength and consolation upon all those affected and offers encouragement to the civil authorities and emergency personnel in their ongoing rescue efforts.”