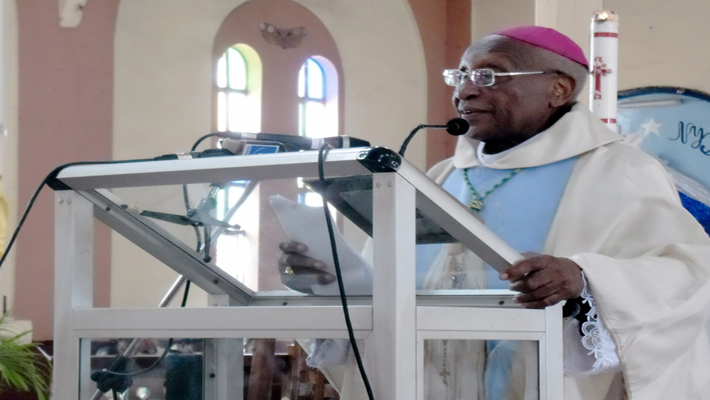 LOME, FEBRUARY 1, 2019 (CISA)-Archbishop Philippe Kpodzro, emeritus of the Catholic archdiocese of Lome, has invited the Episcopal Conference of Togo to lead the country in finding solutions to the prevailing political crisis.

Speaking January 29 at a press conference, he urged the bishops to draw inspiration from the National Episcopal Conference of the Democratic Republic of Congo (CENCO) in charting the way forward for the country.

“The Church remains the last and only credible bulwark for the people in disarray of our countries who hope, despite everything, the day of their solemn entry into Canaan,” he said questioning the credibility of the December 20 parliamentary elections.

“How is it possible that a legislative vote boycotted by a significant part of the electorate transcends arithmetic as well as partisan political realities to reach a national participation rate rising to almost 60 percent?” he posed.

The Togolese opposition boycotted the elections denouncing, among other irregularities, the non-compliance with the provisions of the Road Map of the Economic Community of West African States (ECOWAS) on the composition of the Independent National Electoral Commission (CENI).

Togo has been marred with political unrest since August 2017 when the Togolese opposition started demanding constitutional reforms and the departure of President Faure Gnassingbé.