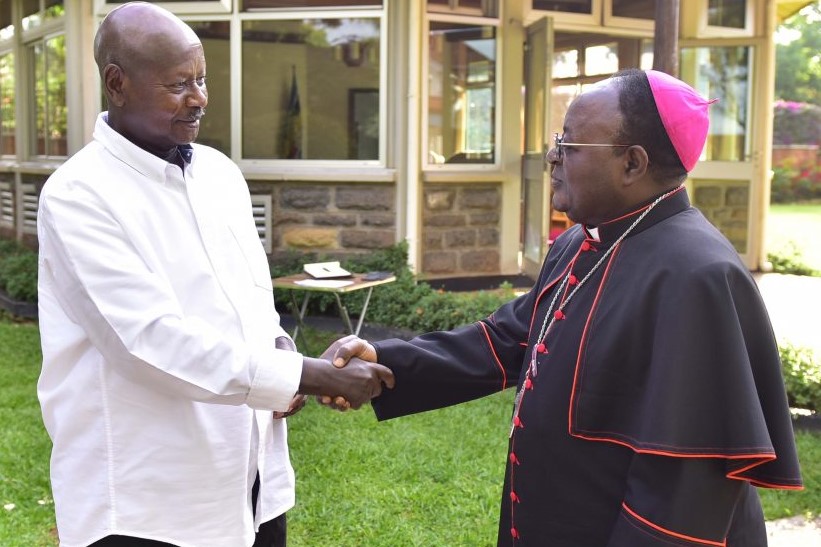 KAMPALA APRIL 10, 2018(CISA)-Archbishop Dr Cyprian Kizito Lwanga of the Catholic Archdiocese of Kampala has held private talks with President Yoweri Museveni  in an attempt to ease tensions between Church and State.

The most recent flareup began on Good Friday, when Archbishop Lwanga publicly accused the government of recruiting Church personnel to spy on him.

“A few days ago, I got a telephone call… it was a private [number]; so, I didn’t know [who was calling] and this person had an accent from western Uganda and this is what he told me, ‘there are many lies being told to the president; that… they have recruited your priests, your sisters, your brothers even catechists and seminarians…and we give them a lot of money,” Lwanga said on March 30.

“Some of the clergy that have been recruited are giving wrong information; terrible, terrible, terrible messages…This is the humble message I have for His Excellency and the government; you are recruiting wrong people…some of them we have dismissed and the people with that record are some of those who are shining as saints before you, talking about Archbishop [Stanley, the archbishop of the Anglican Church of Uganda] Ntagali, myself and others,” crux quoted Archbishop Lwanga as saying.

He said another unidentified person “came at night at his gate and threw a letter. When I opened the letter, I saw a list of those who have been recruited to work for the security agencies.”

The archbishop repeated his claims of state spies infiltrating the Church in an Easter Sunday Mass, and brought up the case of a priest who died recently under mysterious circumstances.

The prelate warned  President Museveni not to be guided by people who tell him “lies such as competing politicians, business people, and civil servants, members of the press, police officers and the security agencies.”

A statement issued from State House on Easter Monday said: “President Yoweri Museveni and the Archbishop of Kampala Archdiocese, Cyprian Kizito Lwanga, have today spoken over the phone and agreed on a way forward.”