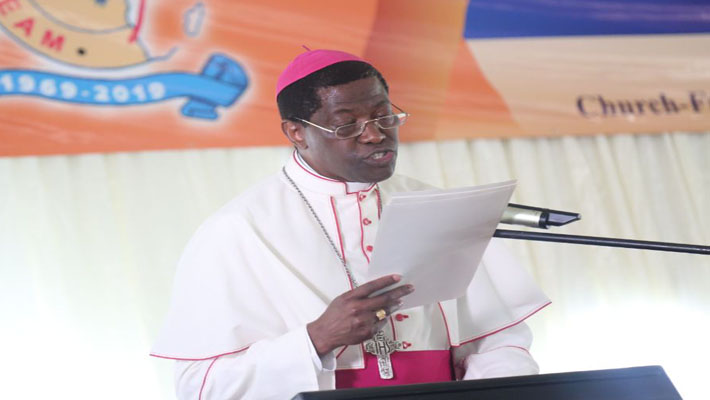 KAMPALA, JULY 23, 2019 (CISA)-The Vatican Secretary of the Congregation for the Evangelization of Peoples, Most Rev. Protase Rugambwa has urged African Bishops to promote a spirit of solidarity and unity in towards building a new Africa.

Speaking to delegates on July 21, during the Opening Ceremony of the 18th Plenary Assembly and Golden Jubilee celebrations of the Symposium of Episcopal Conferences of Africa and Madagascar (SECAM), Archbishop Rugambwa asked the bishops to “…live with ‘collegial affect,’ or ‘affective collegiality,’ which gives rise to a deep concern on the part of bishops for other particular Churches and for the Universal Church.”

“This should concretely translate into, among other things, a tangible participation in the activities of SECAM and its structures, regarding both personnel and finances,” he added.

Archbishop Rugambwa called upon the Church in Africa to heed to the message of Pope St. Paul VI during his visit to Uganda in 1969 which encouraged Africans to missionaries to themselves, a message that gave the African continent a Christian identity.

Archbishop Rugambwa encouraged the delegates to advocate for an establishment of a just social order, noting the three principle elements of the theme chosen for the 2009 Synod, namely reconciliation, justice and peace, adding that the Church has a mission of truth to accomplish.

“In such a way, the Church is called to form upright consciences receptive to the demands of justice, so as to produce men and women willing and able to build this social order by their responsible conduct,” he explained.

He called upon them to emulate the Uganda Martyrs by teaching the faithful to remain courageous and to stand for the truth in whatever circumstances.

The Archbishop told the participants to keep the message of Pope Francis alive which speaks on the need for transformation and conversion in the Church.

Pope Francis in a message from Vatican to the President of SECAM, Archbishop Gabriel Mbilingi, said he is joining all those gathered for the event in thanking Almighty God for the many graces received by SECAM and for the fraternal communion that has characterized its work over these fifty years.

He assured his prayers to members of SECAM so that they may be strengthened in missionary discipleship, for “the great work of evangelization consists in striving to make the Gospel permeate every aspect of our lives so that we, in turn, can bring it to others”.

The SECAM Plenary kicked off Sunday July 20, and will end on Monday July 29.