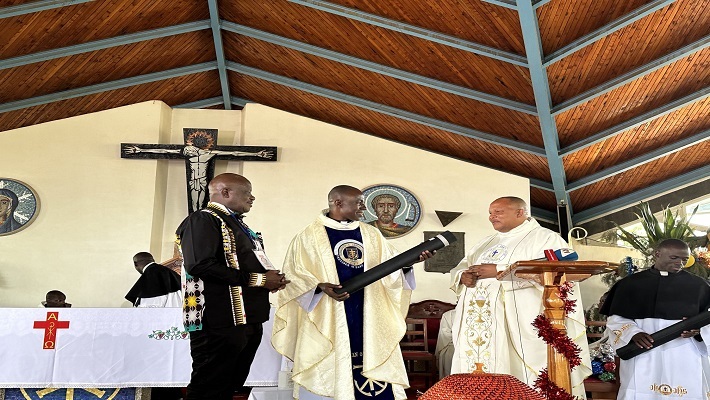 FORT PORTAL, JANUARY 13, 2023 (CISA)- The East African District of the Congregation of the Holy Cross (CSC) has been elevated to a Province in an elaborate ceremony held at the Virika Cathedral of Our Lady of Snows, Fort Portal, Uganda, on January 8, 2023.

The celebration presided over by Rt Rev Robert Muhiirwa of the Catholic Diocese of Fort Portal and concelebrated by Most Rev Philip Anyolo of the Catholic Archdiocese of Nairobi among a host of bishops and priests also served as the occasion for the installation of the first Provincial Superior of the Province of East Africa, Rev Fr Cyprian Binaka CSC, in the presence of Br Paul Bednarczyk, CSC, the Superior General of Congregation of Holy Cross.

Fr Binaka, the new provincial superior has attributed the elevation of the East African District to a steady growth of the congregation’s vocations in Africa.

The religious congregation founded in 1837 in France, first came to the East African region in 1958 and settled in Uganda. Then referred to as the East African District under the Province of the United States. They came to Kenya in 1978 and established the Holy Cross Parish in Dandora, Nairobi.

The male religious congregation of brothers and priests focus on education and evangelizing in schools and parishes.

According to CSC, “both educational institutions, from grade schools and high schools to colleges and universities, and parochial ministry continue to be the pillars of the Congregation’s work of educating and evangelizing.”