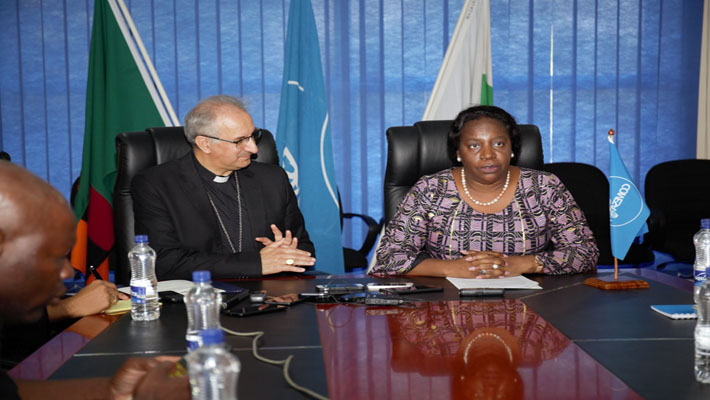 LUSAKA, OCTOBER 1, 2019 (CISA)-Archbishop Gianfranco Gallone, the Apostolic Nuncio to Zambia and Malawi has been appointed special representative of the Vatican to Common Market for Eastern and Southern Africa (COMESA).

While presenting his letter of appointment to COMESA Secretary General, Chileshe Kapwepwe on September 23, Archbishop Gallone pledged to work hard to bring the good of Africa at COMESA.

“My appointment as special representative to this organisation is an expression of the continued good relationship between the Holy See and COMESA, as we share in the goal of contributing to strengthening peace and common good for Africa’s people,” he said.

The Apostolic Nuncio assured of the Holy See’s commitment to Africa as witnessed through the numerous statements by Pope Francis and his pastoral visits to the continent.

“Recently, in his visit to Mozambique, he exhorted for strengthening peace and reconciliation in that country so that the democratic intuitions may be always attentive to the works of the solidarity. In Madagascar and Mauritius, he called upon to render service to the poor, especially who live in the margins of the society, which is serving the humanity,” said Archbishop Gallone.

He promised to fulfil his mission at COMESA in the spirit of mutual understanding and cooperation for the good of Africa and especially to the Eastern and Southern region of Africa.

Kapwepwe welcomed Archbishop Gallone to COMESA and appreciated the Catholic Church’s contribution to social services especially in the education sector.