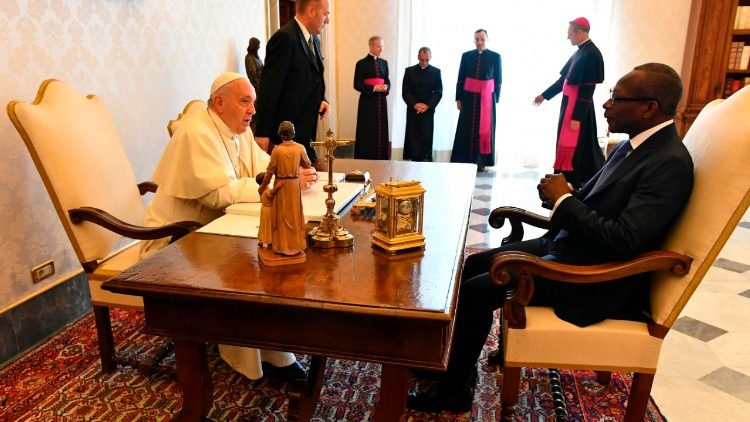 VATICAN CITY, MAY 18, 2018(CISA)-President Patrice Talon today visited Vatican City for the celebration of the 10th anniversary of the late Cardinal Benard Gantin, who died in May 2008.

President Talon was received at the Vatican Apostolic Palace by Pope Francis, where they held a brief meeting, where the Pope acknowledged, “…the existing good relations between Benin and the Holy See”, as well as “…the positive contribution of the Catholic Church to the Benise society, especially in the areas of education, health and human rights.  They also discussed development, poverty alleviation, reforms in the government and inter religious relationship in Benin,”reported La Croix Africa.

Cardinal Benard Gantin, was a prominent Beninese Cardinal of the Catholic Church, who served as metropolitan Arch-Bishop of the Arch Diocese of Cotonue.  He also served as president of the Pontifical Council for Justice and Peace at the Holy See and as prefect of the sacred congregation of Bishops, before his death.

President Talon presented Pope Francis with gifts including a royal recession, a traditional stick which is a symbol of royal authority in the Kingdom of Dahomey.

In reciprocation, the Pope gave his guest a bronze medal representing the angel of peace slaying the dragon which is a sign of, “…the victory of peace over the war.”

As he usually does with distinguished guests, he has also given him his texts Amoris laetitia, Evangelii Gaudium and Laudato si ‘, as well as his message for the specially signed World Day for Peace 2018.

After his meeting with the Pope, the President of Benin also met Cardinal Pietro Parolin, Secretary of State, and Bishop Paul Gallagher, a diplomat of the Holy See.