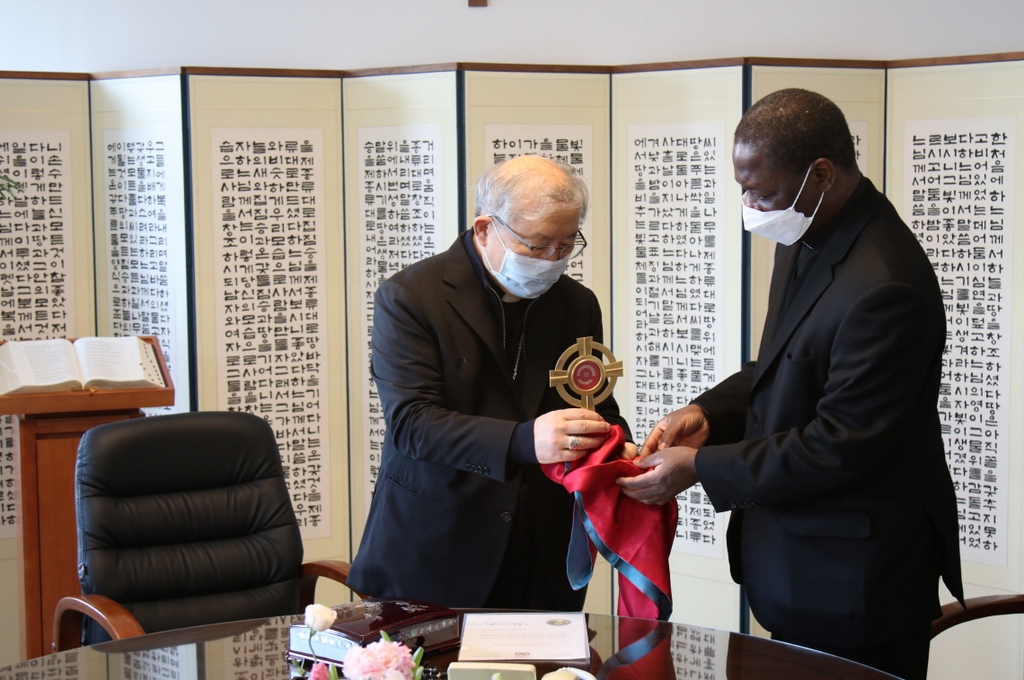 SEOUL, NOVEMBER 30, 2021 (CISA)-Part of the remains of martyred Korean Catholic Priest will be enshrined in Burkina Faso on the altar of St Joseph’s Cathedral in the Catholic Archdiocese of Koupéla.

In a press statement by the Catholic Archdiocese of Seoul dated November 23, Cardinal Andrew Yeom Soo-Jung, the Archbishop Emeritus of the Archdiocese, handed over a relic which contains the remains of St. Andrew Kim Dae-geon [Taegon] to Monsignor Julien Kabore, charge d’affaires of the Apostolic Nunciature in Manila in the year that marks the 200th anniversary of the birth of the Saint.

Monsignor Julien Kaboré’s petition according to the statement, “was a major factor in Cardinal Yeom’s decision to send the remains of St. Andrew Kim Dae-geon.”

“When Monsignor Kaboré worked at the Papal Embassy in Korea in the past, he was deeply impressed with the history of martyrdom in the Korean church and the veneration of martyred saints. Accordingly, he requested Cardinal Yeom that he would like to enshrine the remains of Saint Kim Dae-geon in the ‘St. Joseph’s Cathedral’,” reads the statement in part.

Monsignor Kaboré expressed honor that the Church in Burkina Faso has to enshrine the Saint.

“It is such a great honor to enshrine the remains of St. Andrew Kim at a Cathedral in Burkina Faso. This is a sign of unity and the communion of saints. I would like to extend my sincere gratitude to Cardinal Yeom for his thoughtful consideration and support on behalf of His Excellency Gabriel Sayaogo, archbishop of Koupéla,” uttered Monsignor Kaboré.

Cardinal Yeom said, “I am very pleased to be given the opportunity to build fraternal solidarity between the Catholic Church in Korea and Burkina Faso through St. Andrew Kim. I believe that it will allow us to be more deeply united in the love of God.”

The newly built ‘St. Joseph Cathedral’ was constructed using funds from Yeouido-dong parish, in the Catholic Archdiocese of Seoul.

“This time, as the remains of St. Kim Dae-geon were enshrined, we became more deeply in solidarity with the Korean church,” part of the statement reads.

Kim’s remains are currently scattered and enshrined in 200 places at home and abroad, including Rome, Macau and Indonesia.