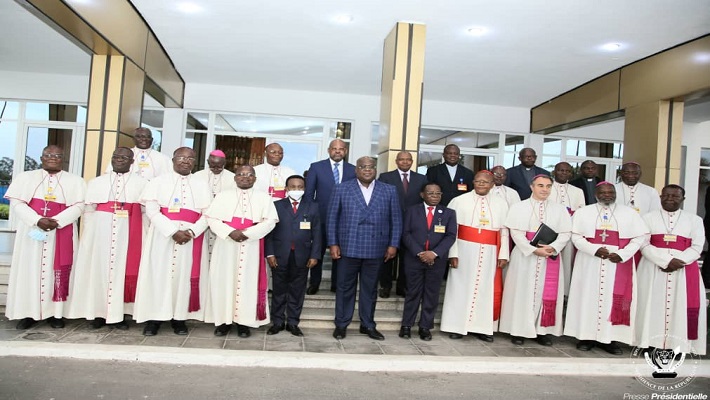 KINSHASA, NOVEMBER 30, 2021 (CISA)-President Félix Tshisekedi of the Democratic Republic of Congo received proposals from the National Episcopal Conference of Congo (CENCO) on how to support the electoral process and the state of siege in force in Ituri and North Kivu.

The proposals were made on November 26, when the president received the bishops in audience for a constructive exchange.

“This fruitful meeting makes it possible to unite social forces to support the electoral process that everyone wants to be transparent, fair and efficient. The family photo reflects the friendly and fraternal atmosphere of this meeting made for the supreme interest of the Nation,” the president reported on twitter.

Since the confirmation of Denis Kadima as head of the Independent National Electoral Commission (CÉNI), the Catholic and Protestant Churches repeatedly expressed their disagreement with the selection criteria while campaigning for the depoliticization of the CENI.

In DR Congo, it is the religious denominations that are responsible for appointing the chairman of the commission responsible for the organization and management of the electoral process. This choice is then approved by vote by the deputies. The final confirmation, however, falls to the President of the Republic who issues an appointment order.