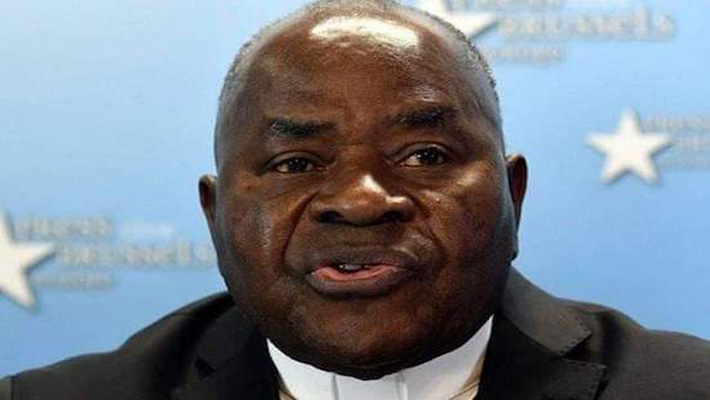 KINSHASA, APRIL 24, 2020 (CISA)-Bishop Gérard Mulumba Kalemba emeritus of Mweka succumbed to Covid-19 on April 15 was buried at the St Kaggwa Seminary cemetery in Kinshasa in a private ceremony.

The funeral Mass held April 16 was closed to the public presided by Cardinal Fridolin Ambongo, the Archbishop of Kinshasa and attended by family members led by President Félix-Antoine Tshisekedi, his nephew.

Fr Donatien Nshole, the Secretary General of the National Episcopal Conference of the Congo (CENCO) eulogized Bishop Mulumba as a very friendly and sensitive man.

“I knew him as a priest and bishop. My first contact with him as priest was in 1985. I was a seminarian on internship at Inongo and he came to preach at a retreat to our sisters. He was rector of the major seminary,” he said.

“I later found out that Bishop Mulumba lived with the orphans and the children in his bishopric. It was really a family atmosphere,” he added.

Mulumba Kalemba was the brother of Étienne Tshisekedi, who was a longtime opposition leader in DRC and served as prime minister three times.

Bishop Mulumba was ordained a priest in 1967. He then studied theology in DR-Congo and then the sociology of development in Belgium. In 1989, he was appointed by Pope John Paul II as bishop of Mweka, in the province of Kasaï where he served until his retirement in 2007.

In May 2018 he was appointed head of the president’s civilian home. He was responsible for the management of the stewardship and logistics of residences and private presidential sites, as well as the secretariat of the Head of State and the presidential medical service.

Tested positive for COVID-19 and due to the nature of the disease he was confined for a few days at the Ngaliema clinic in Kinshasa and later died on April 15.