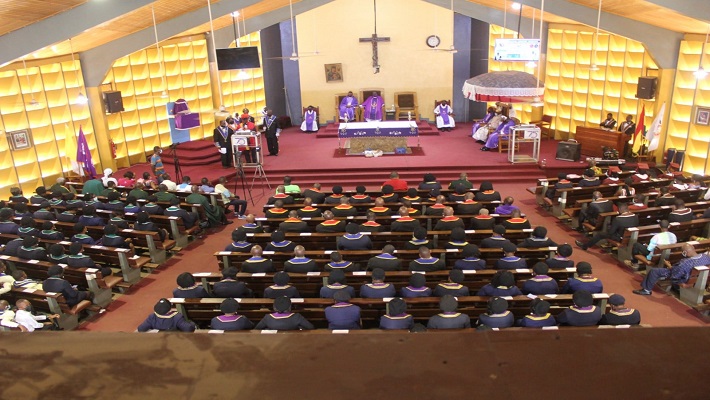 TAMALE, MARCH 25, 2022 (CISA)-The President of the Ghana Catholic Bishops’ Conference (GCBC) and Archbishop Philip Naameh of the Metropolitan Archdiocese of Tamale has asked the Noble Order of the Knights and Ladies of Marshall in Tamale to assume the role of catechists in addressing the decline in the number of Catholics in the country.

According to the findings of the 2020 Population and Housing Census released recently, the country has witnessed a drop in membership of the Catholic faith by three percent.

“I would like to draw your attention to the just-ended population Census. If you look at the figures and analysis in some context, it’s very interesting. The number of Christian populations has remained the same at 71% but the Catholic Church has lost by 3% and we (Ghana Catholic Bishops Conference) want to believe that this 3% has run to the Pentecostal Churches and not Paganism nor Islam,” said Archbishop Naameh.

“You have done very well, but you are not doing catechism. I think it’s the role that every Bishop will be happy with if the Knights will enter and play the roles of catechists,” Archbishop Naameh said.

“Some of our People leaving and going into some of these Pentecostal churches is also because they don’t know the faith of the Catholic church. But the spiritual formation that you continue to impact on Brothers and Sisters, helps you to mature, and a mature faith sees nothing more than passing on the faith to others. And I think with your help, we can connect together in a good way to prevent all these things from happening,” he added.

Also, the archbishop said the Church is intensifying her presence in Chaplaincies and non-Catholic schools so that Catholic children who go there will not be unnecessarily lured to go to Pentecostal and charismatic churches or One-man churches.

The Order also rallies Catholic Men and Women for the effective apostolate and the advancement of fraternal relations, charity, unity and service to God.

The year-long anniversary was jointly launched by the Supreme Knight, Sir Knight Brother Patrick Kobina Anumel and Most Respected Grand Lady Sister, Elizabeth Anderson-Yebuah with a call on members to continue to enhance their spiritual formation for growth and development.