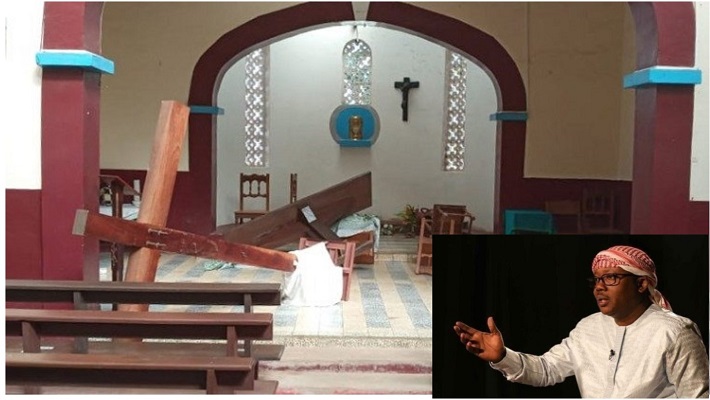 GABU, JULY 8, 2022 (CISA)-As the country awaits reports on the vandalization of the Catholic parish of Santa Isabel, in Gabu, President Umaro Sissoco Embaló of Guinea-Bissau has downplayed the happening terming it as something that is not out of this world.

“How many times have mosques been robbed here? If the church has been robbed they have to let the police do their work. If the church has been vandalized is it out of this world? in mosques? People have to stop with bullshit, even in the Vatican and in Mecca people steal, is it something from another world?” he told journalists at Osvaldo Vieira International Airport.

President Embaló had arrived in the country from a summit of the Heads of States of West African Countries, in Ghana, in which he was elected Chairperson of the Economic Community of West African States (ECOWAS) on July 3. The region has been recording rising cases of religious intolerance and abductions of priests, especially in Nigeria.

The attack in Gabu on July 2 is the first case of an attack on any place of worship in Guinea-Bissau. According to Fundação Ajuda à Igreja que Sofre (AIS), an international Catholic pastoral aid organization, the attack “is disturbing the Christian community, ever since the images of the destruction in the temple were circulated on social media.”

AIS warns that the attack “comes to give some importance to the warnings of the US Government’s annual report on religious freedom, released in June and in which refers to the increase in extremism in Guinea-Bissau.”

While also commenting on the incident, the president of the Confederation of Islamic Youth (CNJI-GB), Hamza Seidi denounced the “act of terror”. “We strongly condemn this act, because nothing justifies the attack. Guinea-Bissau is a secular country and we cannot allow such an act to happen in this country. Therefore, we demand that the competent authorities investigate and hold the people involved in this act, which we consider to be terror, accountable.”

Vandals destroyed almost everything inside the Church, from the altar, the Pilgrim Cross and even the image of “Our Lady”. Some objects were destroyed and left outside the parish.

“I think that person [who carried out the attack] was motivated by a type of hatred. Whether it’s a religious hatred or a political one, we don’t know the reason, but it’s a hatred that led the person to do this because he didn’t steal and didn’t take anything from the church for himself,” said Fr Paulo de Pina Araújo, from the Diocese of Bafatá, which houses the Santa Isabel Parish.