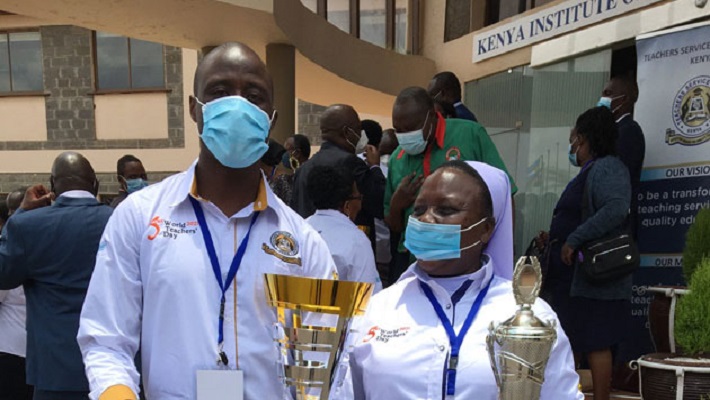 NAIROBI, OCTOBER 8, 2021 (CISA) – Four Catholic teachers were among the 31 teachers recognised by their employer, the Teacher’s Service Commission (TSC) as Kenya commemorated the World Teachers Day on October 5, 2021.

Sr Anne Onyancha of St Peters Mumias Boys Primary School, a member of the sisters of Mary of Kakamega, was awarded for managing a school that featured among the top performing schools in the country in last year’s Kenya Certificate of Primary Education (KCPE). The school which is sponsored by the Catholic Diocese of Kakamega produced two of the top 20 students in 2020.

Br Peter Tabichi of Keriko Mixed Secondary School, who was the 2019 winner of the Global Teacher Prize, was recognised by TSC for his exemplary work in promoting education by donating most of his salary to help poorer students. Br Tabichi, a member of the Order of St. Francis (OSF) also received the 2020 Ahimsa Award by the Trustees of the Institute of Jainology in London.

Mr Eric Ademba, a teacher of Mathematics and Chemistry at Asumbi girls, a school run by the Franciscan Sisters of St. Joseph (Asumbi Sisters) was also among those who were awarded at the event.

St. Joseph’s High School, Kitale principal, Ms. Rosabella Orwaru was honoured to have managed the second – most improved institution in Kenya, a school owned by the Catholic Diocese of Kakamega. This year’s theme for world teacher’s day is, “Teachers at the heart of education recovery.”