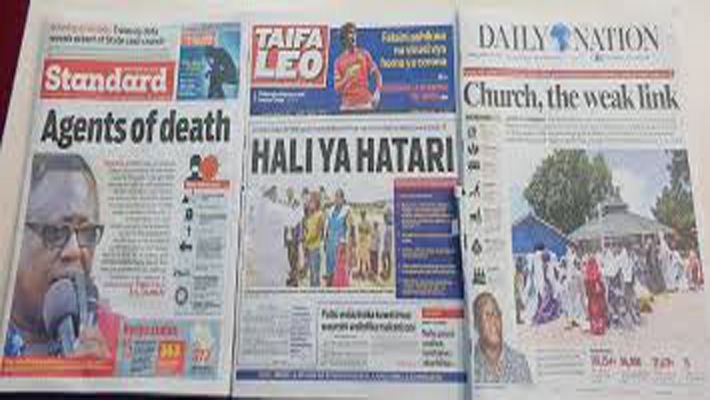 NAKURU, MARCH 27, 2020 (CISA)– The Lay Apostolate of the Catholic diocese of Nakuru are calling on the Media Council of Kenya  to compel two local daily newspapers to apologise for unethical reporting about the Church’s commitment in controlling spread of Covid19.

“Contrary to the media coverage, the Catholic Church has been a strong link; an agent of life and a partner in the face of this epidemic and other major catastrophes in the nation and in the world,” reads a March 24 statement signed by Ronald Sunros Sunguti, the Lay Apostolate Coordinator of the Catholic diocese of Nakuru.

This is in response to headlines on March 23 by Daily Nation; “Church, the weak link” and The Standard Newspaper; “Agents of death” which the statement termed as misleading.

“The catholic Church has been at the forefront of promoting a culture of life from conception to natural death,” the statement reads noting that Christians, Priests, the religious Men and Women and the Lay Faithful have been the face in calamities and seemingly put their lives on the line to save lives.

“Therefore, misleading reporting by such mainstream media is in no way helpful to the current predicament. To the contrary, they are unethical, insensitive and creating unnecessary tension,” it reads.

The statement condemned the media for exposing the identity of two out of those who tested positive of coronavirus saying it, “…causes unnecessary fear, panic, animosity, and a distraction from the consolidated efforts of different persons and groups to fighting and/or preventing the virus breakout in Kenya,” urging the media to be professional and ethical, but not sensational.